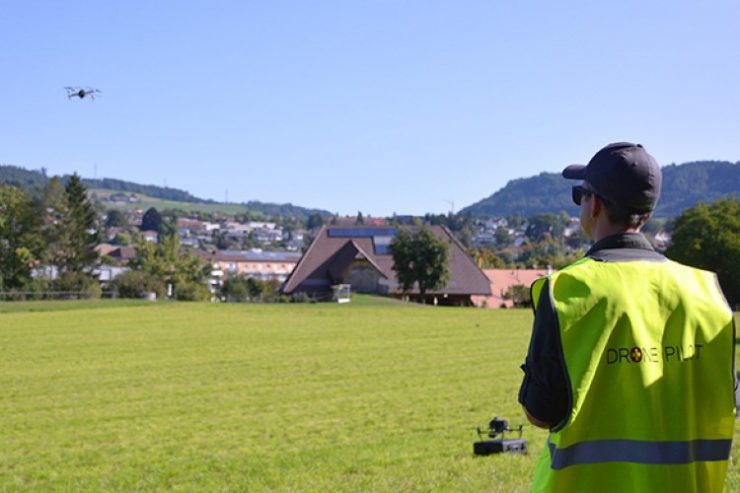 The Swiss Federal Office of Civil Aviation (FOCA) has released its report into the remote-identification-of-drone trails of 16 September this year which set out to prove whether the proposed ASTM WK65041 (UAS Remote ID) standard and current industry solutions can meet European Commission requirements for remote ID.

According to the FOCA report:

“The networked Remote-ID solution in particular proved fully satisfactory. Data exchange among participants worked flawlessly, the display providers were able to show a fully consistent picture of the airspace. The broadcast solution also worked as expected in the limits currently defined by the standard. The operationalization of the standard’s broadcast portion remains, however, an open question as the proposed solutions, Bluetooth and Wi-Fi, have clear limitations. The demonstration also highlighted the need to better quantify the limitations and the performance of the broadcast solution. On the regulatory side, FOCA is now equipped to start working on an on-boarding and monitoring process in collaboration with SUSI members interested in providing networked Remote ID services.”

The European Commission’s Delegated Act (EU) 2019/945 of 12 March 2019 defined requirements for remote identification of drones and established that remote identification data shall be received directly by existing mobile devices within the broadcasting range. According to the FOCA report:

The Swiss Remote ID Demo split the roles as follows:

Four DJI drones were used during the trial.

“Network Remote ID used an underlying Discovery and Synchronization Service (DSS) which enabled different Net-RID Service providers to be discoverable (find each other) for the area of interest requested by the Net-RID Display Providers. The DSS is a distributed capability that can be provided by several entities sharing data based on specifications from another ASTM standard (under development). During the demo, the DSS was provided by skyguide (via AirMap) and Wing via the InterUSS Platform, an open-source project by the Linux Foundation which implements the DSS….

“The feedback from the participants was overall very positive in particular in regards to the tools that were presented to them during the demo. Questions targeted mostly the implementation of the new regulation in Switzerland as a whole, for instance the link with the registry and pilot competencies. The question of data retention and data access for the police was also raised. The standard offers two mechanisms to protect operators’ data: a temporal limit and a geographical limit. Data is only displayed for sixty seconds and RID-Net Providers can only query an area with a diagonal of 3.6 km. The goal is to minimize the use of the Remote ID as a tool to collect and aggregate data on drone operations. The police was, however, interested in accessing data further in the past. A distinction between the use of RID by the general public and the law enforcement agencies is therefore required. FOCA will take the necessary regulatory action to ensure proper access to data in due time and in the framework of a related but separate tracking service.

“Everything worked as expected. The altitude, height and speed of the drones were displayed. The direction of the flight could be estimated using the trajectory of the aircraft over the last sixty seconds, which was shown as a trail….Compared with the EU requirements, only the position of the pilot or the take-off point had not been implemented yet by the participants. A non-equipped participant was successfully displayed on all frontends using the networked solution. By definition, the flight itself was not visible, however the flight area was announced using the skyguide/AirMap application and displayed by all Display Clients. The solution worked as expected.”

“The European Regulation requires drones to broadcast data in a way that existing mobile devices can receive them. The Swiss FOCA performed follow-up investigations in the days after the demo and reached the following conclusion: at the time of writing, Wi-Fi is available on most drones but its proposed implementation on the mobile device side (Wi-Fi Aware) is only available on a small fraction of devices. We are not aware of a fixed roadmap regarding when, if ever, this technology will become widely adopted. Our understanding is that SSID, another Wi-Fi mechanism, is not included in the standard because, although available on all mobile devices, the latest implementations of Android have limited refresh rates and because all drones would be displayed on all phones in the Wi-Fi settings. Those two facts make SSID difficult to use for Remote ID. Bluetooth, on the other hand, is readily available on all mobile devices. To the best of our knowledge, the vast majority of drones sold today are not equipped with Bluetooth, leading to the exact same challenges as Wi-Fi but in reverse. In addition, we are not aware of studies showing that the proposed solutions would work at scale in urban environments. Formal tests in this direction are needed before nation-wide deployment of the technology could be supported.

“In summary, although technological solutions are available, the question of the operationalization of the broadcast portion of the standard is fully open. The gap between the European regulator’s intent (Delegated Act) and the documented deployment capabilities from the industry is cause of concerns. The networked solution worked as intended. All elements of the standards could be satisfactorily demonstrated, including the use of DSS. There are aspects to be further explored such as what would happen if one of the providers would fail. FOCA will work in the coming months to develop onboarding processes as well as the necessary oversight mechanism for U-Space service providers who would like to perform any of the roles described in the standard. These efforts will be performed within the framework of SUSI to ensure collaboration with all stakeholders.