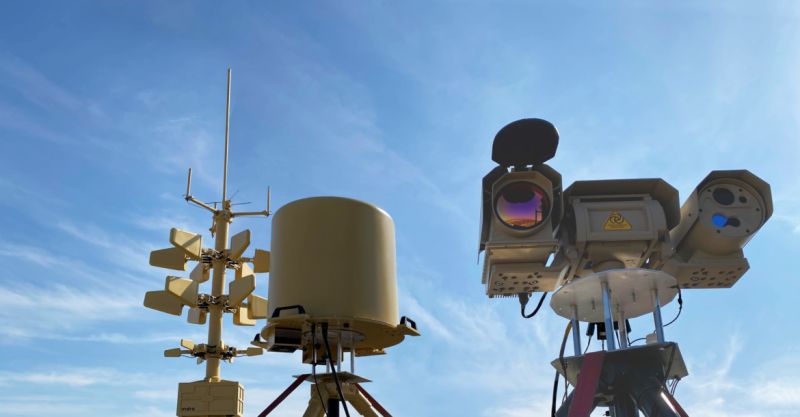 The Air and Space Army Air Deployment Support Squadron (EADA) was in charge of conducting the exercise and demonstrating to a large number of experts and clients the intelligent system that is already being used in complex civil and military missions.

On this occasion, the mission was to protect the runways of a small simulated airfield in which, unexpectedly, two drones took flight just one kilometre away, leaving minimal reaction time to neutralize them. The Crow system’s high-precision radar immediately detected the intrusion, and its optoelectronic systems made visual contact to confirm the threat. At the same time, the system’s electronic defence antennas scanned the radio spectrum to determine what type of link these devices were using.

All this information fed Indra’s advanced algorithm solution to select most effective countermeasure based on extensive drone data libraries. As soon as the first of the two aircraft crossed the non-intrusion perimeter, Indra’s jamming system was activated and blocked their communication links and positioning systems, forcing them to land. The drones were prevented from approaching any aircraft arriving or departing the airfield.

Head of Counter-UAS systems at Indra, Juan López Campos said: “The vast majority of incidents that occur are caused by the inappropriate use of commercial drones, which many systems can counteract, which provides a false sense of security. Stopping an intentional attack, in which advanced drones are used with the aim of causing the maximum possible damage and in which the safety of passengers on a flight is at stake, for example, requires the use of a completely reliable and effective system, like the one that Indra offers its clients”.

According to Indra, anti-drone systems are a very complex technology that requires the combined use of different systems that must work together with total precision at enormous speed. In this sense, Indra brings experience as a major radar manufacturer, a leader in electronic defense and command and control systems, and a pioneer company in the development of all types of radiofrequency systems, positioning and communications. At the same time, it is a drone manufacturer with its own family of unmanned vehicles, giving it a deep understanding of the systems it employs and how to neutralise them. Only in this way is it possible to put on the market a critical solution like this, which all the airports in the world.

Crow has already proven its effectiveness in real operations: It protected Spanish soldiers in Mali, and the presidents and heads of state who landed at the Torrejón de Ardoz Air Base to attend the NATO Summit in Madrid in June 2022.