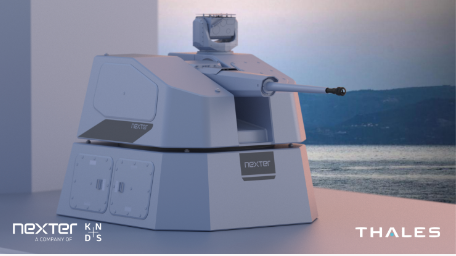 A joint press release says a new close-in protection system designed to protect platforms from low-level air threats, including drones, will be unveiled at EURONAVAL 2022. The RAPIDFire artillery system is designed to autonomously and automatically acquire, identify and destroy a threat using target designation data provided by a combat management system. With a ready rack of 140 rounds of ammunition, corresponding to about 30 interceptions, the system offers firepower against drones and swarms of drones, avoiding attrition of surface-to-air missiles in the event of a saturation attack. Automatic real-time selection of different types of ammunition is designed to defeat different types of threats, including personal watercraft, free-floating mines, ships, loitering munitions, unmanned aerial systems, fighter jets, attack helicopters and missiles at ranges of up to 4,000 metres.

Risk of collateral damage is reduced thanks to the coupling between the fire control system and the turret, and ultimately through the use of Anti Aerial Airburst (A3B) munitions, says the press release. The unit has already been adopted by the armed forces of France, the UK and Belgium. It can also be adapted for land-based platforms such as the CAESAR MkII truck chassis.