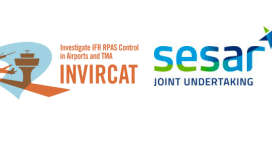 SESAR has published results from the INVIRCAT Exploratory Research (IR) co-funded research project to address the control of remotely piloted aerial vehicles (RPAS) in the terminal manoeuvring area (TMA) under Instrument Flight Rules (IFR). The main goals of the INVIRCAT project are the creation of a concept of operations for remotely piloted aircraft systems in the terminal manoeuvring area of airports, assessing it through simulations and draft a set of recommendations for rulemakers and standardization bodies.

Four simulation campaigns at three different facilities with separate focuses were carried out in the INVIRCAT project, with a total of 72 scenario runs and numerous participants: RPILS, ATCOs, pseudo pilots, human factors experts, supervisors and observers.

The validation activities showed that the integration of IFR RPAS into TMA and airports is feasible with the proposed CONOPS.

Safety is not negatively impacted according to the validation results. The results indicate that IFR RPAS can be safely introduced, and no major performance differences with manned traffic are detected.

Human Performance received mostly positive feedback from RPIL and ATCOs. The introduction of IFR RPAS does not negatively affect ATCOs and RPIL during operations in both nominal and contingency conditions. ATCOs stated that IFR RPAS can be treated as manned aircraft, and they were mostly ahead of the traffic situation and evolution. RPILs stated that the autopilot and ATOL allows for and enabled safe operations.

Operational Efficiency received generally positive feedback by RPILs and ATCOs. Communication was mostly clear and without misunderstandings. Communication latency did not represent a real issue. ATCOs reported that C2 link latency did not influence their tasks. RPILs reported minor issues with high C2 latency during the take-off. Information through the HMI was mostly on time and clear. Some specific HMI aspects have been considered worthy of improvement. The proposed phraseology was adequate most of the time, while a dedicated phraseology and training was recommended for contingency cases.

Capacity, measured through runway throughput, was not negatively affected. Due to performance differences ATCOs reported that they had to provide the RPAS with radar vectors for efficient arrival stream integration, but for VFR/IFR traffic mixes this is not deemed problematic.

The assessment of the validation objectives showed that most (14 of 18) success criteria could be met and received the status OK.

The 18 validation objectives from the project are summarized, and the 18 linked success criteria are presented. the respective focus of each validation campaign is presented, consisting of selected use cases in certain flight phases:

Unpreventable deviations from the planning documents are mentioned and justified. The previously defined validation objectives are assessed qualitatively and quantitatively, and the results are also summarized per identified key performance area in the project’s scope.

Finally, the expected quality and limitations of the results is discussed. Appendices give more detailed insight into the separate simulation campaigns.