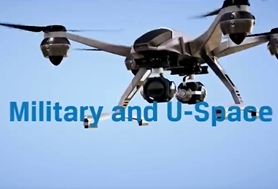 The European Defence Agency (EDA) awarded Egis a follow-on contract in mid-July to further study the impacts of the implementation & deployment of U-space in Europe on military activities at low-level, for example low-level military training flights. This is the third contract under a framework agreement signed with Egis in 2021.

The latest study will include a focus on the “e-conspicuity” aspects – a range of technologies that can help airspace users to be more aware of other aircraft in the same airspace – and on “dynamic airspace reconfiguration”, two topics that are part of the new U-Space regulation but are not yet fully defined from a military perspective, says EDA.

Among key objectives of the study, entitled Military and U-space: Guidelines, as military as necessary, as civil as possible, will investigate the impacts of U-space on military missions and operations; how the military can mitigate these risks; and associated costs.

The purpose is to establish smooth and effective coexistence of civil and military operators in the future U-space drone ecosystem.

Through a four-year framework contract, Egis is assisting the European Defence Agency (EDA) with the establishment and promotion of a common military view on the impact of the development of U-space in Europe and to promote this view to all civilian stakeholders involved in U-space development. The study started with a first phase in 2021 involving: