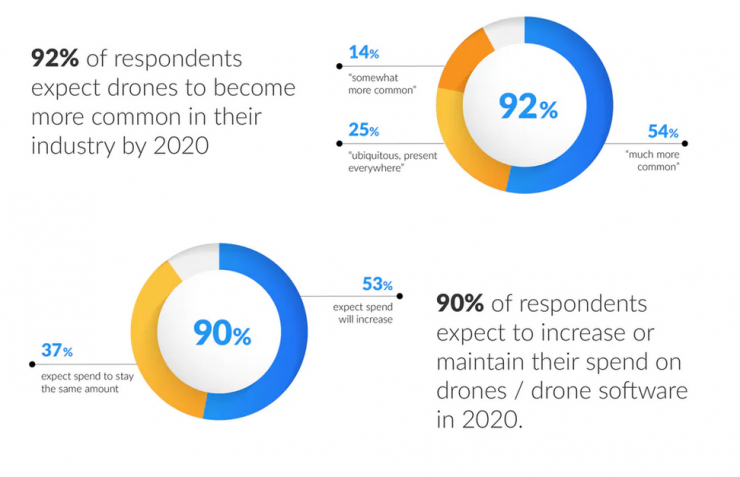 According to DroneDeploy’s latest state of industry survey, drones “are poised for rapid scale and growth in 2020 and the decade ahead”. Drone Deploy surveyed 140 customers across 10+ industries to find out how they use drones and the benefits they provide.

When it comes to applications: “Protection against risks of all kinds drives 69% of use cases, including increased safety (29%), risk management (21%), and compliance (19%). Nearly two-thirds of respondents said that they use drones to “improve operations” and “increase productivity”. The top three motivators for investing in drones were desires for increased productivity (68%), improved operations (66%), and reduced cost(56%).

DroneDeploy also noted the survey shows the “businesses do not adopt new technology as rapidly as consumers. Companies take deliberate steps to ensure technology is secure, that it will bring quantifiable ROI, and that it will be adopted easily by employees. But consumers aren’t the main opportunity for drone businesses: the CNBC piece reports that the consumer sector will make up just 17% of the drone market in 2020. Rather, the untapped potential for drones lies beyond hardware, hype, and the consumer sector. Businesses, more than ever, are finding value in drone software and in the data generated by the software.”

DroneDeploy conducted the survey in December 2019 via an online survey form to its active customers from a sample of over 145 companies across 10+ industries in English. Respondents are paying members of DroneDeploy’s leading drone data platform.