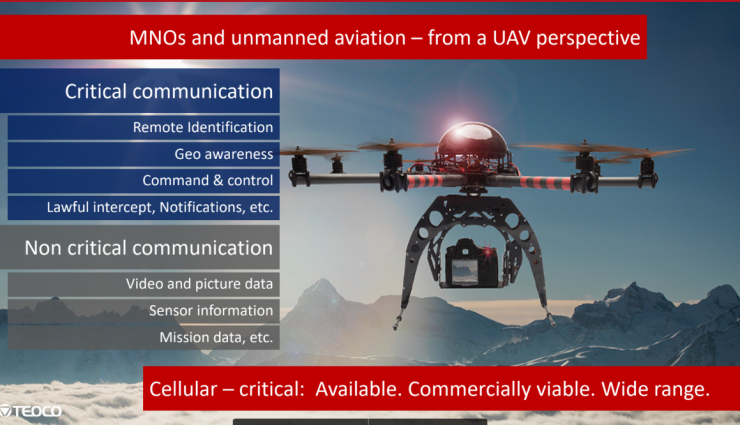 Any uncertainties about what role mobile network operators (MNOs) will play in the future UAS traffic management (UTM) sector were quickly resolved in GUTMA’s latest Connected Skies: Aviation and MNOs – the missing link? webinar, held on 20 May. All roles – from registration through to providing the entire communications, navigation and surveillance/air traffic management (CNS/ATM) network – could be provided by MNOs.

Peter Jones, Drone, UAV and Robotics Technology Expert with Australian MNO Telstra outlined the many UTM services the company was working on in its converged tower and related programmes. The company has been researching how to ensure security of communications between platforms and the ground by setting up private Access Point Name (APN) – a series of settings in a mobile phone which opens a connection gateway between the carrier’s cellular network and the public internet – and adding various other security mechanisms. Telestra has added a traffic prioritisation feature which will ensure first responders get priority access to the network and is now helping to develop the communications network to support Uber Elevate trails in Melbourne in the coming years. 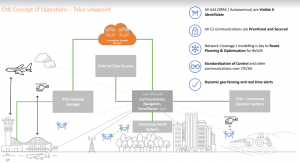 “Remote ID is a matter of course in the network and we have other mechanisms in place so we can securely pass that identification data not just from the device to the network but also bring it back from the network into the application layer and securely deliver remote ID protocols to identify aircraft in flight,” said Peter Jones. “We think that for truly autonomous work we could securely deliver the waypoint missions on to the aircraft making sure that the mission hasn’t been tampered with since its approval by the regulator, or whoever else is clearing the flights. This will allow for interruptions to those missions – a “return to base” command for example – should circumstances require it.” The hook-on device which allows these communications also feeds back network performance measurements in real time – which could feed into the risk assessment and flight approval process. The company can also provide data on population densities and more data from micro weather monitors on towers and cameras to able to capture cloud base conditions and even act as a detect-and-avoid system.

“We are working on tracking and control in real time – we will have to condition the network particularly around the approach and departure corridors where the requirement for high-speed low latency data will be critical to get aircraft on and off landing pads.” In the post operational phase the company will be able to monitor whether the missions were carried out according to the flight plan approvals and report that back to the regulator.

Thomas Neubauer, VP of Innovations at TEOCO, Co-founder of Dimetor and meeting moderator spoke of the importance of Service Level Agreements. “In most jurisdictions you are only allowed to provide SLAs for communication in licensed spectrum, so telecommunication companies (telcos) already have that asset. Telcos also provide data on where people at a point in time, cloud edge processing and redundancy in having multiple access technologies running independently or across multiple network operators. But there is a gap between critical safety data which telcos could provide but is highly classified.” This is a gap between the aviation and telecoms industry which the GSMA and GUTMA are working in closing in the Aerial Connectivity Joint Activity (ACJA) programme which is driving a standardisation initiative to align the two industries. 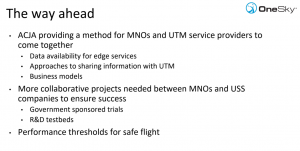 “We focus on business first and technology second,” said Sander Barake, Innovation Lead at Dutch MNO KPN. KPN has been involved with the Dutch Drone Delta, working with partners to build a drone eco system in the Netherlands. “Connectivity is a real good basis for us but it’s just a basis; we see data handling and data exchange will create real value.” In answer to a panel question on the reliability of MNO networks to provide aviation services Sander Barake replied: “Our coverage is dynamic, not static – it differs with the usage of the network, so its very important to have real-time information on coverage.”

“The missing link (in the UTM eco-system) is communications,” said Christopher Kucera, Head of Strategic Partnerships at UTM service provider OneSky. “To enable beyond visual line of sight (BVLOS) missions we have to have infrastructure to provide full coverage and MNOs have that. The converged tower concept brings together three different capabilities. First there is the ability to augment infrastructure to add additional radios for surveillance of air traffic or environmental conditions – pulling in data from FLARM, ADS-B, WiFi, Bluetooth for remote ID surveillance, monitoring the local weather and tracking acoustics information to measure sound level of UAM operations and network interferences such as interruptions to the GPS signal. 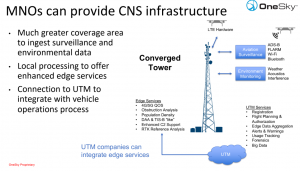 “We can do processing at the edge – investigating population density levels and allowing the UTM system to bring forward services from the cloud – such as registration, flight planning and authorisation. These are basic services available in the cloud and we could take some of these services to the edge and provide data at the cell phone tower level to understand where that drone is going to.”

OneSky is working within the NASA model to look at how the UTM’s CNS network is performing – defined as a “supplemental data service provider” (SDSP) function and to understand how secure MNO networks can be managed inside the overall UTM network to provide data services at an aviation-grade command-and-control level of robustness.

In reply to a question from the audience about the potential role of LTE broadcast capabilities, Christopher Kucera said: “LTE broadcast is a technology that can provide information back out from the network to broadcast where drone positions are.”

Another audience member wanted to know whether MNO-based UTM systems could be evolved to supported manned aviation operations at lower altitudes.

“There’s a lot of uncooperative airspace users in the lower altitude  – cranes, hang gliders, parachutists for example – and we’ve got to get a handle on their location before we start using UAM and UAVs en masse,” said Peter Jones. “All these things are popping up with very little visibility to aviation systems at the moment. 4G and 5G can be a unifying technology, no more complex than an app in the pocket of a skydiver that stops him colliding with a Cessna.”

An audience of 95 participants took part in the webinar, which was organised for GUTMA by https://www.manageld.com/.