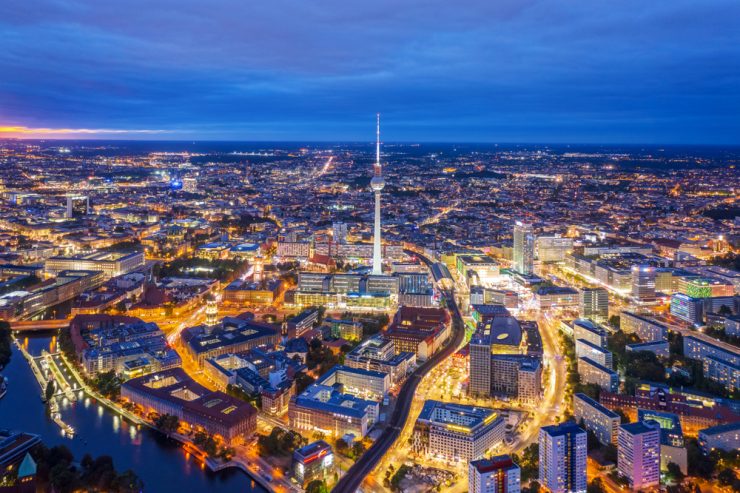 “This means drones, also known as unmanned aircraft systems (UAS), can be safely integrated into airspace and commercial drone flights over long distances are possible. The system has been validated and tested for robustness. To date, the UAS traffic management (UTM) system has been used to successfully complete more than 50 long-range flights, covering a flight distance of around 2,350 km. The UTM service combines the tracking and control of drones via LTE with the live transmission of video, image or sensor data – a unique service in the current German drone market.

“This UAS Traffic Management (UTM) system shows both manned and unmanned traffic in a combined air situation display. With the system, users can plan their drone missions and check which permits are required for each flight. As soon as they start the mission, this airspace is displayed as occupied to other UTM users. The web display also shows relevant manned air traffic that users must avoid. Visibility and safety in uncontrolled airspace thanks to LTE transponders.

“To make drones visible to the UTM system, Droniq has developed a hook-on device (HOD). This matchbox-sized LTE modem transmits the position of the drone and its identification to the UTM via the cellular network. It also receives the positions of the surrounding traffic and feeds them into the UTM’s live air situation display. In addition, all general aviation pilots in the vicinity of the drone automatically receive a warning directly in the cockpit – even if they do not use the UTM service.

Thanks to its low weight and minimal power consumption, the hook-on device can be attached to any aircraft.

“The hook-on device is in demand throughout Europe and is a leader in the tracking of drones. It will significantly strengthen the German drone market and also set the trend for the creation of the technical standards for drone tracking,” says Jan-Eric Putze, CEO of Droniq.

The press release reports that Droniq is also the exclusive distribution partner for Sky Drone in Germany. Sky Drone has developed a module that transmits control commands (command & control) and payload data, such as video, image or sensor data, in real time via LTE.

“The combination of tracking, control and payload data transmission via LTE in a single service is unique in Germany,” says the press statement. “At European level, the European Aviation Safety Agency (EASA) is currently working on a concept for U-Space, the future airspace in which manned and unmanned aircraft will fly together. Our UTM service complies with the requirements of the EASA’s U-Space concept and can also act as a model for the implementation of Long-range flights with drones are now possible 2/2 U-Space in other European countries.”

“The hook-on device is also the best device for the network remote identification required by EASA, said Ralph Schepp, COO of Droniq.

The press release also announces that anyone who flies a drone in Germany must take out liability insurance for their aircraft.

“Droniq is offering its own liability insurance exclusively with the insurance company R+V Versicherung. The insurance specifically covers flight operations beyond the visual line of sight (BVLOS) – a unique product in Germany. In addition to the BVLOS insurance, Droniq covers the entire spectrum of services needed for drone flights beyond the visual line of sight. Droniq staff from the areas of air navigation services, aviation and mobile communications can develop concrete flight missions with customers. They can also provide assistance with permits as well as train drone pilots or even deploy Droniq’s own pilots. UTM service and hook-on device now available The development work on the UTM was carried out primarily by DFS and a full version can now be purchased from Droniq. The UTM package includes a monthly licence for the UTM system and the HOD, cellular connectivity for the first year after purchase and a lifetime FLARM licence.

“The UTM system is already in operational use. It is being used by companies in the chemical, energy supply and construction industries, for example, as well as by the police, fire and rescue services. Some prominent drone manufacturers have already integrated the hook-on device into their aircraft. Droniq will present the functionalities of the UTM system and the added value it can offer for each customer segment in live demonstrations and expert talks near Frankfurt, Germany.