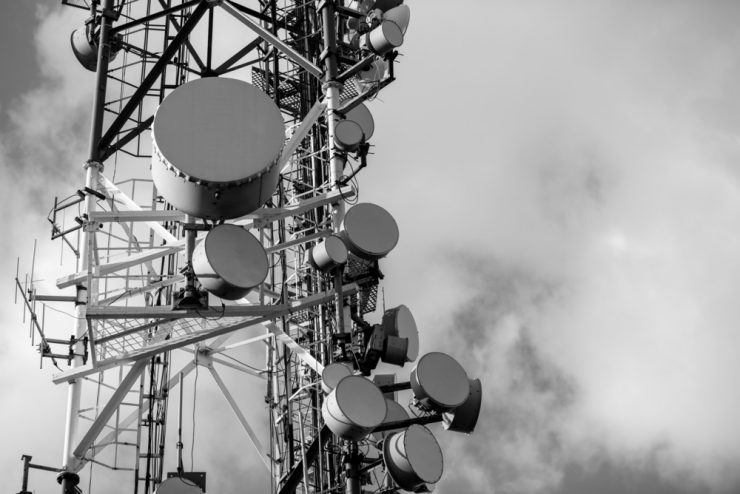 Cellular networks can provide more than just advanced connectivity services to drone operators and UTM service suppliers – they can deliver a range of advanced features such as non-cooperative drone detection, computing-on-the-edge functionalities and precise weather forecast services for urban advanced mobility services, according to speakers at the 29 April GUTMA “Cellular Networks as a fabric for Aviation Functions – Technical implications” webinar, the latest in the series of GUTMA/GSMA “Connected Skies” events.

Mark Davis GUTMA Associate Member, former VP Intel and chair of the meeting, began by outlining the aviation functions that can be supported on a cellular network (see table).

Professor Gabriel M Rebeiz, Distinguished Professor and the Wireless Communications Industry Endowed Chair at the University of California, outlined the results of trials using 5G base stations to detect non-cooperative objects such as drones. “For non-cooperative objects we have repurposed a 5G millimetre-wave base station, with no change in electronics, no change in anything but wave form…and found we can detect very small UAVs at 2km and large UAVs up to 10 and 20km.” According to Professor Rebeiz: “Even with a very small aperture-cross section object like a DJI Mavic, which has 0.1m2 radar cross section, one can still detect it at 2km…this is very encouraging…You can use this concept because of the very low cost of 5G arrays which are being manufactured in high volume.”

Dr Martin Fengler, Founder & CEO Meteomatics, has been developing the concept of using drones for more accurate forecasting, gathering data out to 6km and assimilating the data into a high-resolution model to improve the short term forecast. More recently, the company has been working with Swisscom on a study to improve weather monitoring forecasting for areas such as urban canyons  – where immediate data is required  – by integrating readings from existing infrastructure, such as towers. “The idea is to have a network of sensors from 20m to 50m, the height of the cell tower, and to have model levels with which you can compute dynamical forecasts close to the surface but not at the surface. We have equipped towers with sensors and are now doing simulations with the data to show how this impacts short term forecasts for the next two hours. The idea is to have hundreds of these sensors in urban area like Zurich, for example.”

Mélanie Guittet currently leads the Business Development at INVOLI. The company has developed a capability of capturing signals from low altitude air traffic, via a network of sensors, mounted on telecom antennas which also allows for large scale cross validation of all the received signals – ADS-B, FLARM, transponders, Mode-S – to give drone operators a view of the air traffic in their area.  The network has been deployed throughout Switzerland on Swisscom towers. “It enables real time coverage of all air traffic and complements skyguide services, especially the lower portion of the sky,” she told the audience. “We are developing an enhanced receiver which would also integrate remote ID capabilities – to have Bluetooth and Wifi receivers – following the guidelines from ASTM workgroup 69690.“

Stefano Faccin Director of Technical Standards with Qualcomm Incorporated told attendees that 5G will mean “We can integrate edge computing capabilities, UTM technology, all aspects of data collections that these systems are capable of, counter UAV mechanisms which can use 5G in a distributed computing infrastructure.”

“5G puts a lot of intelligence at the edge…we can provide processing capability, so, as an example, perform intelligent processing of video imaging for collision avoidance or added functions for devices that are less capable….even integration with an ADS-B system. The other aspect is very important is that we can have a distributed UTM by pushing more functions to the edge, such as remote dynamic control of the performance, other radio links for command and control and in general much more local awareness and collection of data.”

Henrik Rydén is a Senior Researcher in Radio at Ericsson Research in Kista, Sweden and has been working on  developing machine learning methods for detecting non-cooperative drones flying in cellular networks but using the 4G service for sending video streams and then informing the service provider of the presence of unregistered connected drones.

The characteristics of a drone at altitude are very different from terrestrial users, he said. “The detection accuracy very much improves with altitude so we have seen in our urban deployment results that 100% accuracy (of drone detection) are possible at 120m and above.”

The trials were based on a 4G system; with 5G the detection accuracy improves considerably.

Thomas Wana, CTO and Co-founder of Dimetor spoke of the three main challenges in connecting mobile cellular networks to the aviation sector: the data which will need to be provided for aviation safety operations is kept commercially in confidence by mobile network operators (MNOs); aviation organisations will need to know, preferably in advance, details of the robustness of the cellular network and the interfaces between the two industries are not defined – there are no protocols or standardisation.

“We have developed AirborneRF which satisfies both the automated data interface between the two industries as well as protecting data privacy and confidentiality,” he said.

The system analyses the service status of the cellular networks to guarantee that it can provide a minimum service level for flight tracking and monitoring; if a connection is lost it notifies the operator and external UTM provider in real time that there is a system outage and suggests an alternative route which will guarantee the drone is fully supported by robust cellular network coverage throughout its flight. 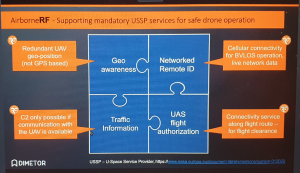 An audience of 131 participants took part in the webinar, which was organised for GUTMA by https://www.manageld.com/.

Further webinars in this series are: