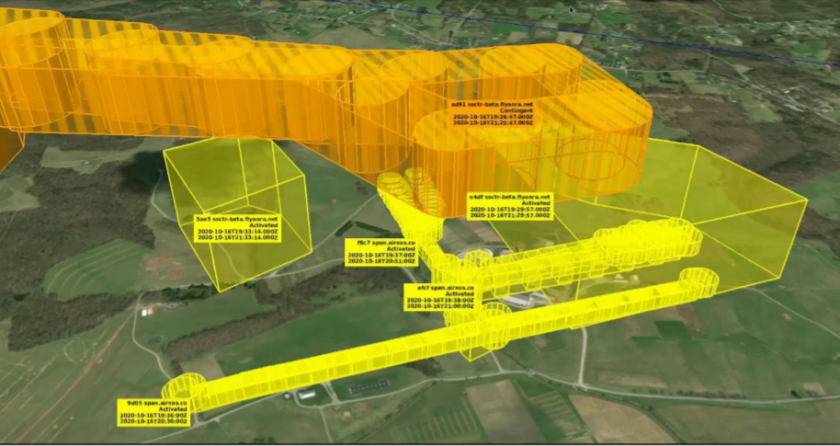 The Federal Aviation Administration (FAA) has announced the results of its Uncrewed Aircraft Systems (UAS) Traffic Management (UTM) Pilot Program (UPP) 2 set of trials and demonstrations. Key elements of emerging UTM capabilities that will support beyond visual line of sight (BVLOS) operations were tested and although, in principle, current industry technologies for managing high density operations and strategic de-confliction were shown to be effective, there is still work to be done before they can support commercial operations.

The objectives of the programme were to test:

According to a high level view of the programme’s conclusions:

“UPP2 was successful in examining a variety of end-to-end UTM functionalities and gathering information necessary to support initial implementation activities. While many aspects of UPP were successful, as with any demonstration of this nature areas of potential future enhancements or improvements on the process were identified. UPP partner teams provided feedback on lessons learned through the development and demonstration activities, and program-level lessons learned were also collected.”

The following is an edited compilation of the programme’s main objectives and recommendations:

Recommendations: Increasing density of operations served as a valuable tool for stress testing various functionalities and interoperability requirements within a cooperative traffic management ecosystem such as UTM. For example, approaches to strategic deconfliction at the time of testing presented challenges to maintaining high-density operating environments. Given altitude restrictions for UAS operations (400 feet AGL) combined with the ASTM Draft Specification for UTM  of 95% containment error bounds, capacity of the airspace was limited and deconfliction was complicated. Additional requirements development/testing, followed by industry evaluations in live-flight environments, will support continued improvement to capacity and efficiency of UA operations in a given airspace.

UPP2 test goals to demonstrate UVRs were intended to determine the data exchange performance across the network, such as gathering and transmittal of operational intent, and the performance of data transmission from USS to DSS. During the demonstrations of the UVR prototype capability, USS network participants successfully proved interoperability of the system in transmitting, displaying, and notification of distributed and overlapping UVR information.

Recommendations: In the near term, additional development and refinement of the UVR capability is needed, including permissions and business rules required to utilize UVRs, availability of relevant contextual UVR information, and improving how the information is transmitted, accessed, and displayed. Continued conceptual and policy efforts are needed to determine requirements that address these gaps.

Recommendation: While both strategic deconfliction and network performance supporting data exchange showed success during demonstrations, some refinement is required to expand operational use of the deconfliction approaches and the system and software prototypes developed to support deconfliction. Current draft UTM standard requirement of 95% containment presented challenges as it was often hard to achieve both deconfliction and a high-density environment given the altitude constraints currently imposed on UAS operations….Demonstration results show that additional contextual information for operators is needed for full deconfliction information sharing to be realized. Further development by industry is needed so that USS software may fully implement automated means of sharing information.

UPP2 goals for Remote ID were to demonstrate system performance in providing certain identification, location, and UA performance information that people on the ground and other airspace users can receive. The ASTM Specification for Remote ID, which details performance requirements for UAS Remote ID technologies and services, was utilized as the benchmark for flight test demonstrations. Overall, prototypes tested were able to successfully transmit broadcast Remote ID information at distances where the UA was difficult to visibly detect, up to 3,000 feet. Additionally, industry participants provided feedback indicating their assessment that ASTM Network Remote ID as defined in the standard can work in an operational environment and support stakeholder needs.

Recommendations: While the demonstration and research of the capability to broadcast Remote ID information was successful, the tests revealed several needed improvements requiring additional testing. Test site partners and stakeholders found that screen size should be adjusted, automatic testing of Remote ID providers is needed, Bluetooth V5 is more capable, production hardware designs require careful attention, and actual broadcast latency impacts, and considerations of spectrum analysis may need additional analysis for given areas. The demonstration of the capability to broadcast Remote ID revealed efficacy across the prototype services; however, additional testing may be required to optimize Remote ID broadcast capabilities. Automatic testing of Network Remote ID Service and Display Providers should be incorporated in future tests to ensure interoperability and compliance to the standard.

UPP enacted security measures to protect the information exchanges between the participants. UPP1 established a baseline for ensuring the authorization of participants using a central authorization server to issue access tokens that are required for any UPP communications. In addition, UPP1 required TLS protocols to be used for in-transit protection. UPP2 built upon those initial baselines to add digitally signed messages and a PKI which provided application layer protections for integrity, authentication, and non-repudiation.

Recommendations: Future implementers of UTM should consider security to be a critical enabler of the UTM concept. Participants must trust that the information they receive from other UTM participants has not been altered or corrupted. In addition, participants must trust the source of received data to use such data to inform operational decisions. The FAA, industry, standards bodies, and other UTM stakeholders should continue to evaluate the security needs for the UTM ecosystem to determine the appropriate protections for UTM data exchanges in the future.

UPP2 Demonstration activities tested off-nominal events for nonconforming and contingent operations, as well as detection and alert of crewed aircraft in the vicinity of the operation using ACAS-sXu. Conformance monitoring was implemented by participating USSs and ACAS-sXu was integrated with a UAS and with an SDSP via a GBRS and a ground-based ADS-B receiver. Each system met the intended goal for the demonstration with nonconforming UA and aircraft being appropriately displayed to stakeholders.