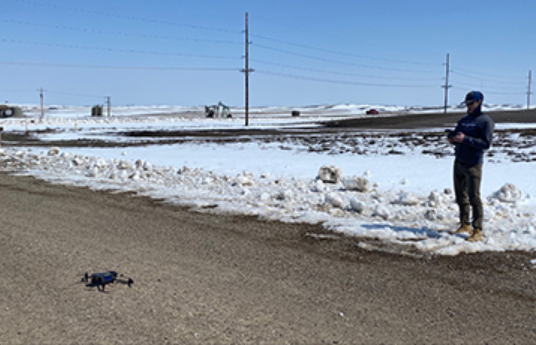 The remote-pilot-operated drones, flown by ISight Drone Services and the NPUASTS, are able to operate beyond-visual-line-of-sight (BVLOS) flights as part of the state’s creation and implementation of Vantis, North Dakota’s UAS network. The UAS flights have been supported and monitored through Federal Aviation Administration (FAA) regulations and officials.

The drones are assisting members of the North Dakota Association of Rural Electric Cooperatives, complementing efforts with manned aircraft utilized by Montana-Dakota Utilities. As crews work around the clock to restore power, it’s estimated that some western and northwest parts of the state will not regain service for days or weeks. After coordinating with the FAA, flights began Tuesday, April 26.

“This is one of the primary applications we envisioned in creating this UAS network,” said Trevor Woods, NPUASTS executive director. “We hope this nimble response can help the state’s residents in getting life-saving power restored, and benefit areas and businesses affected by the natural disaster. For such a massive undertaking in fixing lines and infrastructure, we know that locating damage in difficult-to-travel-to areas saves time and assets that can’t afford to be wasted.”

The NPUASTS, one of seven FAA test sites, has been assisting UAS testing for nearly a decade, and has been a leading research facility in the United States. It has been building out Vantis, the state’s BVLOS network that it administers, since the initial state investment in 2019. Vantis’ primary test sites in the Williston and Watford City areas are in close proximity to the regions most heavily affected by the storms.