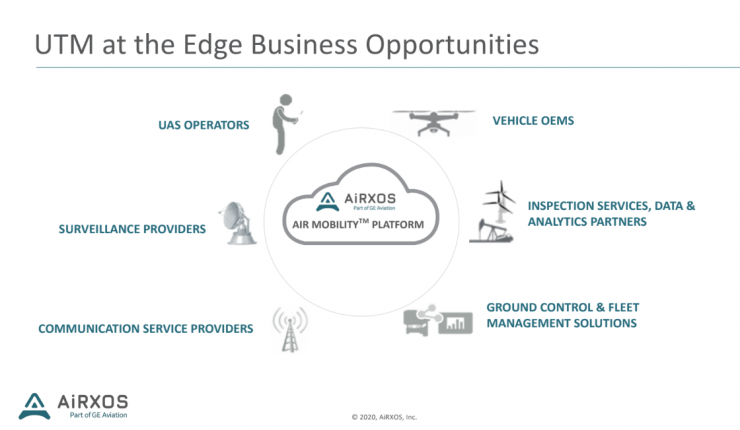 What are the commercial opportunities for UTM service providers, drone operators and mobile network operators in moving their services to the edge? This was the subject of the latest GUTMA/GSMA Connected skies webinar “Drone Services at the edge – business implications, held on 6 May 2020.

“For a UTM eco system the edge could be many things – the drone itself, the ground control station, associated mobile devices, the mobile network infrastructure operator, the cell towers, anything which is not the UTM service supplier (USS), the UAS operator or cloud server could be defined as ‘the edge’”, according to Ted Lester, Chief Technologist at AiRXOS, part of GE Aviation. The advantages of edge computing include reducing the downlink and opening the market for supplemental data service providers, such as weather services, who will be able to network sensors on the vehicles and cells towers and integrate them with drone surveillance systems. “USS functionality such as conformance monitoring, geofencing and trajectory prediction can be pushed to the edge to allow the vehicle more autonomously to make those decisions.” 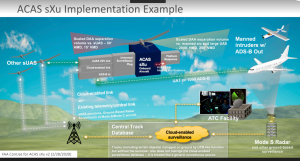 With run-time assurance, additional processing is brought forward to the vehicle itself, as a smart extension of the UTM/USS network, he said. This concept has been standardised by ASTM 3269, whereby increased processing at the edge enables increased autonomy and reduced reliance on the remote pilot, which provides a major economic benefit. The concept has been demonstrated by AiRXOS during a recent UTM NASA TCL4 project. At the heart of this is the concept of a “trusted pilot”, which can step to ensure safety at all times.

In an answer to a question from the moderator, Simon Johnson, Acting Secretary General of GUTMA, these services could be provided on either a pay-as-you-go model or a flat enterprise-wide fee. “The market is still a little immature at the moment to define exactly how this might work,” said Ted Lester. For USS companies the small number of drones currently operating today means that there will be losses in the short term but as the number of drones starts to scale up these companies will be profitable. 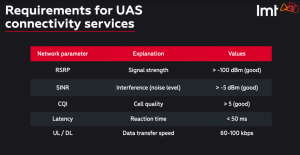 “LMT has developed a hook-on device which allows for command and control (C2) of the drone via the mobile network and we have been able to demonstrate first beyond visual line of sight (BVLOS) flights via a C2 link in Latvia. After analysing the data of the flights using the public mobile network we concluded this was sufficient enough for C2 and real time video streaming. Based on our estimates of reliability need the performance of the network was around 97.6 per cent.”

Gints Jakovels agreed that this level of reliability was not sufficient for a secure C2 link but it could be used, for example, in a rural area where operators are supplied with a coverage map to show the areas the MNO is confident in providing a robust service. In more populated areas the connection could be used as a back-up system or the provider could offer dedicated, separate frequencies operations such as emergency services.

Hanno Blankenstein, Founder & CEO of Unleash live, has been developing a network which integrates drone based data (telemetry and video data) and streams it over the 4G system and then integrates it with data from other sources – such as mobile phones, CCTV and connected robots.  This allows the operator to apply AI analytics to help with the planning and emergency response workflows.

The company has partnered with USS company Skyward to integrate airspace management into the package. “Not only do the enterprise subscribers of Skyward have intelligent airspace management to get fast airspace clearance but the data can be connected from the drone and sent to the people who need the data to make critical decisions. We see this is a significant requirement to scale drone programmes,” he said.

But he expressed a concern that standards will need to be set across all components – drones, cell towers, pilots, networks and cloud providers. “There are different standards for video compression, for telemetry and how the AI systems are distributed throughout the network,” said Hanno Blankenstein. “We need this to scale up.”

“There’s a real intersection of what’s happening with the hybrid cloud – the mobile network – and edge architectures in offering new opportunities around inspection,” said Mike Mulica, Executive Chairman of AlefEdge. This is allowing companies to integrate AI into drones so they can operate in a completely autonomous mode. “The key characteristics are going to be the intersection of computing and communications. A few different pieces of the puzzle are coming together: the cloud vendors are moving to edge architectures…which we think will drive low latency and this is the lifeblood for facilitating autonomous services. Over the next 12 months you will start to see latency response times that you have never seen in the past.”

“We are looking at the emergence of using LTE technology in the private network setting to create a fabric of thousands and maybe millions of private networks that are using the same mobile infrastructure to support a communications platform.”

An audience of over 120 participants took part in the webinar, which was organised for GUTMA by https://www.manageld.com/.

The final webinar in this series is: