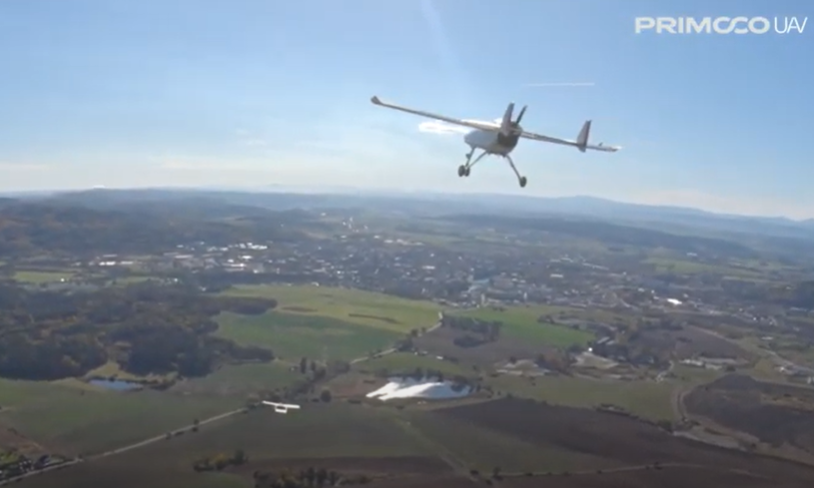 Primoco UAV SE, a Czech company that manufactures the One 150 UAV, reports it has successfully flight tested the simultaneous control of multiple unmanned aircraft from one control station at its airport in Písek Krašovice on 20 October 2021. The UAVs were equipped with systems from UAV Navigation in Spain, Radionor (Norway) and Sagetech (USA).

“The One 150 unmanned aerial vehicle is equipped with a highly advanced control system that enables simultaneous control of multiple unmanned vehicles at the software and hardware level. This feature is useful for users requiring simultaneous operation of multiple aircraft to accomplish a flight mission. An example of this is the deployment of rescue and security forces to search for missing persons in distress. The deployment of more aircraft enables a shorter time to search the required area and therefore faster provision of assistance. Control from a single ground control station also allows a high level of flight safety to be maintained.

“The Primoco UAV One 150 aircraft were fitted with Sagetech’s ADSB In/Out Mode S secondary radar transponders during the flight test and demonstrated their capablity of mutual position tracking independent of the ground control station.

Radek Suk, Chief Pilot of Primoco UAV SE, summarized the tests as follows: “We have managed to verify that our One 150 aircraft allows simultaneous and safe control of two or more assets. Due to the advanced automation of flight functions, control of multiple aircraft by a single pilot is possible, although this activity understandably requires a higher level of attention.”

“Flight validation of the new UAV capability allows for the future combination of control of multiple types of aircraft using the same communications system. This makes possible to combine different platforms without having to have a separate control station for each of them. The entire solution has been verified and complies with the new European Union rules for the operation of UAVs.”

New procedures that improve mass drone traffic are also under investigation by researchers as part of the LABYRINTH project, a European research programme coordinated by the Universidad Carlos III de Madrid (UC3M) with the participation of 13 international organisations.

“The project’s main objective is to integrate a certain degree of automation, so that an operator can control a small fleet of up to 10 drones from a single ground station,” said Luis E Moreno, LABYRINTH’s coordinator and researcher at the UC3M’s Robotics Lab. “The idea is that the operator indicates the mission to be undertaken (for example, monitoring traffic in a particular area) and the system automatically converts this mission into a set of routes that each drone has to follow, automatically calculating alternative routes when necessary,” he said. In addition to planning and controlling routes, two other areas of technology are being subject to work: communication using 5G networks (so that drones are connected at all times) and the computer security behind the entire system.

According to a project press statement, researchers at the LABYRINTH project are developing these technologies within the framework of U-Space. “Air controllers use ATM (Air Traffic Management) to safely manage the traffic of commercial aircraft. Similarly, developing an Unmanned Traffic Management (UTM) system that allows drones to share airspace with other drones and aircraft is imperative,” said Francisco Valera, another scientist taking part in this project and a member of NETCOM (Networks and Communications Services) at the UC3M.