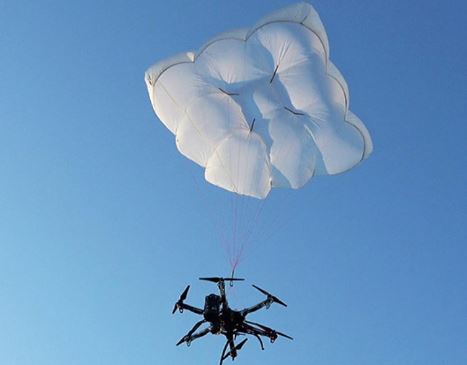 Drone Rescue Systems GmbH launched the DRS-5 and DRS-10 drone parachutes at the Intergeo exhibition at Frankfurt am Main, Germany.

DRS-5 is designed for multicopters with a total weight of up to 8 kg. The system consists of a carbon cage in which the parachute is stored, as well as the associated electronics which monitor the flight status of a drone, independent of the flight controller. An algorithm merges this sensor data, creating an automatic crash detection system which is activated without pilot input.

“The reliability of the system has been verified in extensive tests by Joanneum Aeronautics in Graz. In the framework of the tests 100 flights were conducted, during which the parachute system was ejected. Half of the flights were conducted with a DJI F550 weighing 1.6 kg. The rest of the tests were performed with the 3.8 kg Vulture, which was developed by the FH Joanneum. In both cases the DRS-5 was attached to the side of the main body of the drone. In each of the tests the parachute was ejected at a height of 30 m. Every test was documented. Furthermore, the data were saved both in the flight controller as well as in the DRS-5 sensor system. After every 10th test the parachute system was subjected to a visual examination and checked for possible damage or wear.”

The similar DRS-10 is designed for multicopters with a total weight between 5 and 20 kg.