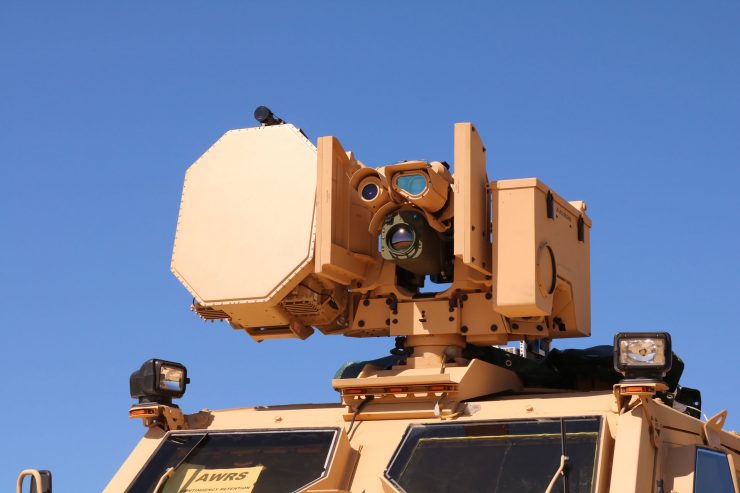 The US Army will start final level 6 TLT trials (Levels of Technology Readiness) on its Ballistic Low Altitude Drone Engagement (BLADE) programme by the end of the year. Level 6 is a model or prototype that has been tested in an operational environment, such as an aircraft or vehicle.

The US Army’s Combat Capabilities Development Command (CCDC) is supporting the Army’s six modernization priorities and has developed the BLADE programme as part of a five-layered counter-UAS defence system –  https://asc.army.mil/web/news-alt-ond19-ccdcs-road-map-to-modernizing-the-army-air-and-missile-defense/ – to protect troops on the battlefield from close-in UAS attacks.

“At the tactical edge, maneuvering soldiers need to have local protection to shoot moving targets such as unmanned aerial systems (UAS), which range from Group 1 (very small UAS) to Group 5 (the largest UAS…. BLADE is a set of enabling technologies that are integrated with an armament system to defeat smaller unmanned aerial systems at close ranges, which includes the distance a Soldier can see a UAS without using binoculars, according to the CCDC. “Its intuitive interface makes the BLADE easy for soldiers to use….The BLADE system works with the Common Remotely Operated Weapon Station (CROWS), and uses advanced fire control and precision targeting enablers to detect, track and defeat unmanned aerial systems. Mounted on a tactical vehicle, CROWS contains a sensor suite and fire control software that allow the warfighter to remotely engage targets. CROWS can engage targets during the day or at night, and includes a daytime video camera and a thermal camera.”

The following text, outlining the five other counter-UAS layers under development, is taken directly from the CCDC website (see link above).

One of the key areas the Army is accelerating is solid-state high-energy laser (HEL) technology. More-efficient laser technology will enable laser-directed energy to be carried on smaller, more mobile Army platforms, which will increase combat capability and improve sustainment. Solid-state laser systems can engage and destroy incoming munitions and drones at a low cost per kill compared with fielded air and missile defense systems.

CCDC’s Army Research Laboratory supports the Army by developing and maturing new fiber laser technology that gives lasers higher power and more efficient output with reduced size, weight and complexity. These higher-power laser systems will have increased lethality and range. The main advantage of fiber lasers is that the laser beam quality is extremely high, which enables the laser beam to focus tightly at long distances. Delivering the laser power into a small area is the key to lethality at long ranges.

The Multi-Mission High Energy Laser (MMHEL), a laser weapon system integrated onto a combat platform, is part of the family of laser technology that the Army is developing. In addition to lethal effects, high-energy lasers can be used for long-range surveillance and tracking.

A Level 7 operational demonstration with the MMHEL will be conducted in fiscal year 2021 using a variety of targets. Then, in fiscal year 2022, RCCTO will field a platoon of four Stryker vehicles with an experimental MMHEL prototype with residual combat capability in support of Maneuver – Short-Range Air Defense.

The MADT missile interceptor technologies are designed for integration into the Maneuver – Short-Range Air Defense (M-SHORAD) platform. The Army recently announced that the first five prototypes of that platform will be delivered for testing beginning in October. These short-range air defense systems will be mounted on a new Stryker variant with a turret that will initially hold two ­HELLFIRE missiles, an M230LF 30 mm chain gun, a 7.62 mm machine gun and four Stinger missiles. M-SHORAD will provide 360-degree air defense protection for Stryker and armored brigade combat teams.

As part of a complex system of ground-based radars, satellite sensors and interceptor missiles, missile interceptor technologies work by using infrared sensors on satellites to monitor heat signatures produced by launching rockets. Once a launch is established, tracking is transferred to radar systems that help verify the missile’s trajectory.

Missile interceptor technologies are also designed to operate with current and next-generation fires radar technology via the network. Next Generation Fires Radar is a collaborative CCDC, Aviation & Missile Center, ARL and C5ISR project to develop technology for an all-digital radar system that will substantially increase performance and reliability over current and planned radars by enabling multiple target tracking and adaptive beam forming. Multimission systems enabled by Next Generation Fires Radar will provide Soldiers with a more resilient capability because they will be able to operate across multiple radar bands for improved performance and survivability.

We are designing, developing and integrating advanced software architecture and digital components into a state-of-the-art radar test bed with an open systems software environment. A government-owned test bed and open architecture software will enable the Army to field new capabilities more quickly and increase competition for best-of-breed upgrades. The test bed, which is planned for fiscal year 2021, will demonstrate improved readiness by allowing Soldiers to perform maintenance and upgrade cycles primarily through software changes.

Many of our projects begin as prototypes or technology demonstrators, which enable us to refine technologies and inform the Army’s path ahead. The High Energy Laser Tactical Vehicle Demonstrator (HEL-TVD) is a good example.

The current HEL-TVD is a 100 kilowatt -class laser system on a Family of Medium Tactical Vehicles platform. It consists of a laser projected through a high-velocity, target-tracking beam control system; power and thermal management systems to power and cool the subsystems; and agility to defeat complex targets. During the past few years, Army S&T work on this effort made significant progress in integrating a militarily significant power level on a tactically relevant platform.

Now the Army is leveraging that progress to merge the ­HEL-TVD with similar efforts by the Navy and the Office of the Secretary of Defense. This partnership will allow the services to achieve a higher-power system that can protect sites from rockets, artillery and mortars and unmanned aerial systems, as well as more stressing threats—significantly increasing the warfighting capability being transitioned.

While the RCCTO pursues this rapid prototyping initiative, the S&T work continues on the next-generation capability. ARL is currently developing proof-of-concept fiber lasers and components and plans to reach Technology Readiness Level 4 (or higher) in 2028.

The LOWER AD technology will make it possible to reduce the size of the missile, which in turn will allow more missiles per launcher. Internal components of the LOWER AD missile technology will include improved navigation and a low-cost seeker and warhead, which will maximize its capability to protect defended areas and troops.

LOWER AD will conduct a flight test in fiscal year 2021, using various targets at extended ranges to demonstrate Level 6 maturity of the technology. A flight test with the ballistic test vehicle will be conducted in the fourth quarter of fiscal year 2019 to verify key component performance.

To develop air defense technologies for a maneuverable, multimission force, we work closely with other government, academic and industry partners. Some of the key projects include digital radar technology, missile interceptor components, air defense gun technology and integrated fire control. We collaborate with industry by leveraging traditional contracting methods, Small Business Innovation Research initiatives, cooperative research and development agreements and a number of different collaborative consortiums, including the Defense Ordnance Technology Consortium and the Aviation and Missile Technology Consortium.

CCDC supports the Air and Missile Defense Cross-Functional Team by providing research, development and engineering expertise to demonstrate near-, mid- and far-term technology. CCDC engineers who work with the cross-functional team keep leadership informed about their activities, and coordinate with representatives from the other centers. These representatives provide periodic cross-functional team and CCDC execution reviews, and they meet regularly for road mapping and status updates, including program executive office and program manager transition agreement partnerships.

The representatives also reach back to their respective centers for information to support the cross-functional team. For example, when the cross-functional team requested a cost-benefit analysis of air and missile defense technology, a CCDC Data and Analysis Center representative pooled the expertise of a group of analysts who quickly conducted risk and performance analyses to support the project.

The CCDC Data and Analysis Center also provides feedback on new equipment training, developmental testing, operational testing and flight tests as they relate to human-systems integration, including how to increase Soldier system performance and reduce physical and mental workload.