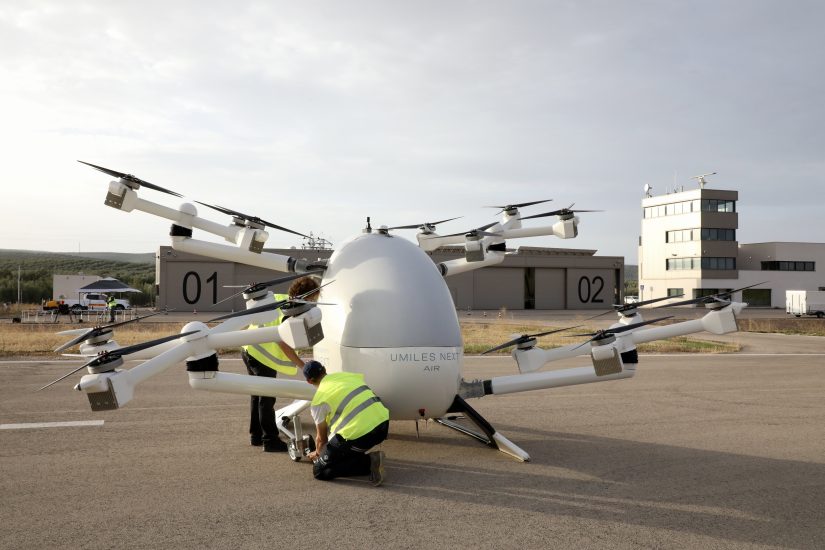 “The test flights took place this morning at the ATLAS Test Flight Centre in Villacarrillo, Jaén, which undertakes testing of unmanned aviation technologies and systems and light and tactical remotely piloted systems. These flights allow UMILES Next and TECNALIA to run further tests on their eVTOL prototype, paving the way for the future integration of the air taxi into urban airspace.

“This is a significant milestone towards the integration of these aircraft into urban airspace, as defined by the European USPACE4UAM project, which seeks to test and demonstrate effective management of urban air traffic featuring unmanned aircraft. The Concept Integrity was flanked at the testing event by other unmanned aircraft at different layers with a view to proving that this new traffic type can be safely and seamlessly integrated into urban areas in the near future. The companies participating in the USPACE4UAM project include HONEYWELL, the project leader, Vertical Aerospace, CATEC and ENAIRE.

“This was the first time the Concept Integrity prototype has flown in open air space in Spain and the aircraft’s second free flight, after it took successfully to the skies of Toulouse back in September as part of an initiative by the TindAIR consortium, which rolls out large-scale urban air mobility test flights to test and demonstrate effective management of air traffic using unmanned aircraft in urban settings. The air taxi’s next stop for further testing is Lugo.”