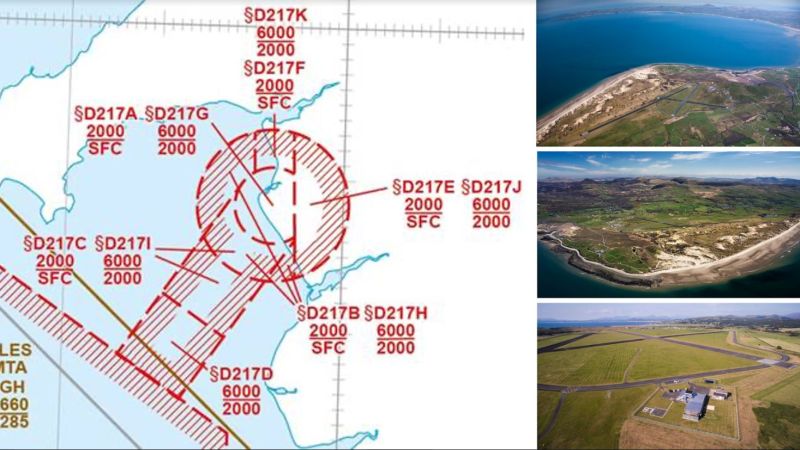 The new Danger Area provides an area of segregated airspace immediately around Llanbedr Airfield for testing of future air vehicles, including Beyond Visual Line of Sight (BVLOS) Drones and Electric Air Mobility Vehicles, together with an air corridor to link the Airfield to the existing adjacent MOD Danger Area D201 in Cardigan Bay to enable further extended range, altitude and endurance testing including potentially a number of near space operations.

The Welsh Government provided financial support to SAC to assist with a proportion of the costs of the 2 year project.

SAC has been appointed the designated Danger Area Authority (DAA) and is the first and currently only commercial DAA in the UK as all other existing Danger Areas around the UK have the MOD as the DAA. Within all MOD controlled Danger Areas MOD operations must take priority of use over any commercial activity. The new permanent Danger Area at Llanbedr Airfield has been developed to serve the needs of commercial operators who remain frustrated by the lack of suitable and viable testing facilities in the UK and is   designed to encourage the commercial exploitation and growth of the future of aviation.

As part of the approval the CAA also created a first and new descriptive activity of operations permitted within the Danger Area. The new permanent Restricted Airspace at Llanbedr will not only allow the testing and operation in segregated airspace of unmanned air systems (drones) and balloons (including airships) but will also now allow the new activity of Test & Evaluation (T & E) operations to take place. T & E has been defined as single or multiple aircraft conducting manoeuvres that may not be able to comply with the Rules of the Air and has been developed to cater for the development and testing of amongst others, electric air vehicles.

Lee Paul, Partner and CEO of SAC said: “We are receiving an increasing number of enquiries from companies looking to take advantage of the new “testing environment” and our first customer is planned for later this month. This is also a significant step in the development of Spaceport Snowdonia and we believe we are the first proposed Spaceport in the UK which has now secured its required Airspace need to support future spaceport operations.”

Jeremy Howitt, Future Flight lead at Snowdonia Aerospace said “The positive decision by the CAA illustrates their commitment to support the development of innovation across the aerospace sector in line with the UK Airspace Modernisation Strategy. The Llanbedr Danger Area provides an unrivalled operational test environment for customers looking to accelerate the development of their drones, urban air mobility vehicles and other novel aerospace systems and will also be a key element in Snowdonia Aerospace’s own flight testing under the UK Research & Innovation Future Flight Challenge as we seek to develop BVLOS drone services to support communities across Wales.”