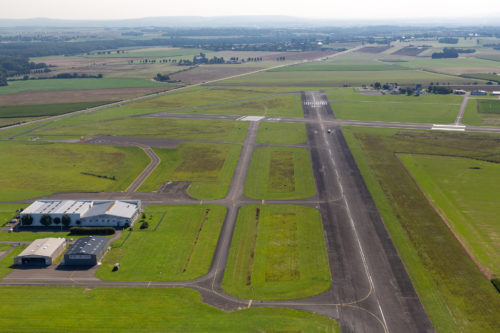 A test centre dedicated to new sustainable urban air mobility at the Pontoise – Cormeilles-en-Vexin airfield, has been inaugurated by the French Minister of Transport Jean-Baptiste Djebbari. The development is part of the Re.Invent Air Mobility initiative led by French airport operator Group ADP, global mobility company RATP Group and Choose Paris Region, a French agency for business and innovation.

The development is supported by the French Civil Aviation Authority (DGAC) and the European Union Aviation Safety Agency (EASA).

The inauguration signals the launch of the first trials in real conditions for eVTOLs – electric Vertical Takeoff and Landing aircraft – and all the elements that will eventually enable them to be used. Now a reality in carbon-free aviation, these flying machines offer a multitude of possibilities for the transportation of people and goods, as mobility needs keep increasing.

The main challenges for the development of this new technology regard acceptability, safety and qualification of uses. Thanks to the tests planned by numerous manufacturers over the coming months in Pontoise, the partners, along with the DGAC (French civil aviation authorities), will study different scenarios for pre-commercial services for the 2024 Olympic and Paralympic Games based on two lines: the first between the Paris-Issy-les-Moulineaux heliport and the Saint-Cyr airfield; the second between Paris-Charles de Gaulle and Le Bourget airports and Paris city, on a site to be determined.

In September 2020, the structuring of a branch in the Île-de-France region around new urban air mobility (UAM) was initiated through the launch of a call for expressions of interest. Approximately thirty manufacturers were selected to carry out tests on the following components: modelling and noise measurements, flight
phases and integration into airspace, maintenance and recharging operations, passenger routes.

To carry out these tests in the best possible conditions, Groupe ADP has achieved a series of development works at the Pontoise airfield: a landing and take-off area, taxiways, parking stands, warehouse planning…

The commissioning of the Pontoise test area was marked today by the trial flights of:
◆ Skyports, with a drone flight dedicated to logistics, notably for medical transport (blood bags, health kits,etc.);
◆ Thales, with the deployment in real conditions of its onboard anti-collision system inside Hélifirst choppers;
◆ Pipistrel (manufacturer of a fully electric aircraft) with a recharging operation, followed by a flight, carried out using the Green Motion company’s certified system, with the support of FFA (French Federation Aviation).

Other test campaigns will be organised around three main themes:
◆ The noise and vibration impact, with RATP Group carrying out a first measuring campaign in March 2022, in partnership with Bruitparif and the DGAC on the occasion of several Volocopter flights. The aim will be to quantify, predict and model the sound emissions of an eVTOL both close and far in order to meet acceptability criteria.
◆ The proper integration of drones and eVTOLs into conventional air traffic, complying with all the necessary safety conditions, will be tested at Pontoise, to ensure proper cohabitation with other aircrafts. These tests will be carried out with the CORUS-XUAM consortium, a project financed by SESAR JU, under the leadership of Eurocontrol;
◆ Finally, all the various topics of the passenger route will be studied with the creation of a modular “Vertiport” reception infrastructure designed by the British operator Skyports in partnership with Groupe ADP. This facility will enable the testing of boarding and disembarking operations, recharging batteries and vehicle maintenance, starting June 2022.

According to Skyports press information, the company is building a vertiport at Groupe ADP’s Pontoise airfield, initially serving as a technology testbed to provide a safe and realistic environment for Skyports and members of the initiative to integrate and test the critical technologies required to enable AAM in Europe. The test vertiport will be equipped with a suite of technologies including biometric identity management, re-charging equipment, situational awareness capabilities and weather stations. The data collected during the testing phase will be essential for the development of AAM regulatory frameworks.

The operational testbed will be used by leading eVTOL vehicle manufacturers such as Volocopter, Vertical Aerospace, Airbus, Pipistrel, eHang and others to conduct test flights and demonstrations over the next three years in the run-up to the 2024 Olympics.

The Skyports vertiport will be constructed using modular technology so that it can easily be relocated to a new location at the end of the programme, serving as the first commercial vertiport in France.

Jean-Baptiste Djebbari, the French Minister Delegate for Transport, stated: “At the 2019 Paris Air Show, Groupe ADP, RATP Group and Airbus haves announced the launch, with the support of the Ministry of Transport, of a study for the implementation of an Urban Air Mobility service for the 2024 Olympic Games. I’m delighted to see one of the concrete results of this partnership being implemented here in Pontoise, and the whole ecosystem that is coming together. The French State is fully committed to the financing, with nearly 25 million euros already provided by the Council for Civil Aeronautics Research (CORAC) for the development of flying taxis, but also for the support of projects with the DGAC and the Agency for Innovation in Transport. Everything is falling into place: partnerships, innovation, test areas, regulations, financing. All the ingredients for success are there, all that remains is to make it happen.”

Augustin de Romanet, Aéroports de Paris SA – Groupe ADP Chairman and CEO, underlined: “Our Pontoise airfield brings together a unique ecosystem around new air mobility and the trial platform we are launching today is unprecedented in Europe. It will function as a concrete experiment to explore the field of possibilities of decarbonised and innovative aviation, and to develop the low altitude aviation market (below 300 metres), which has been largely unexplored until now. In Pontoise, we will test all the components of Urban Air Mobility. Groupe ADP will fully play its role as an aggregator of activities to facilitate the surge of new uses that reconcile a smaller environmental footprint, innovation and common utility.”