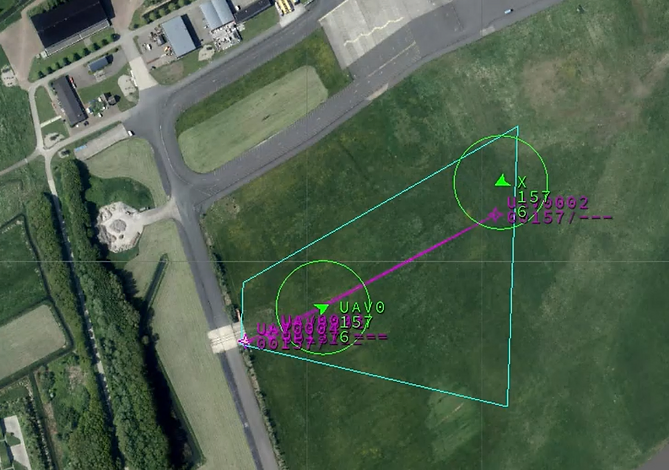 SAFIR-Med partner TU Delft performed multiple successful test flights with a state of the art Detect and Avoid method developed at the university. Methods that are developed for manned aviation have been adjusted such that they can be applied to drones.

For manned aviation, it can be assumed that the airspace in which avoidance maneuvers can be performed is almost unlimited in space. However, as drone operator, we are given a predefined operational volume in which the drone has to operate throughout its mission. Therefore, TU Delft adapted a velocity obstacle-based conflict resolution method to ensure that avoidance maneuvers of drones can be performed within their own operational volumes. This method has been verified to work in numerous of simulations using the BlueSky ATM simulator that has been developed by the ATM department of the TU Delft.

Detect And Avoid maneuvers have been tested in flight at Unmanned Valley in the Netherlands. For those flights, the drone was controlled by the Helicus Command and Control Center located Antwerp, Belgium. Conflicts were generated with simulated drones for which the real drone performed avoidance maneuvers commanded that were automatically commanded from the control center in Antwerp. Two pictures taken from the TU Delft flight planning computer are shown below. The first one shows a conflict that has to be resolved. The second picture shows a flight plan that has been automatically updated by adding an extra waypoint to the route of UAV0 (the AED drone of TU Delft) in order to resolve the conflict.