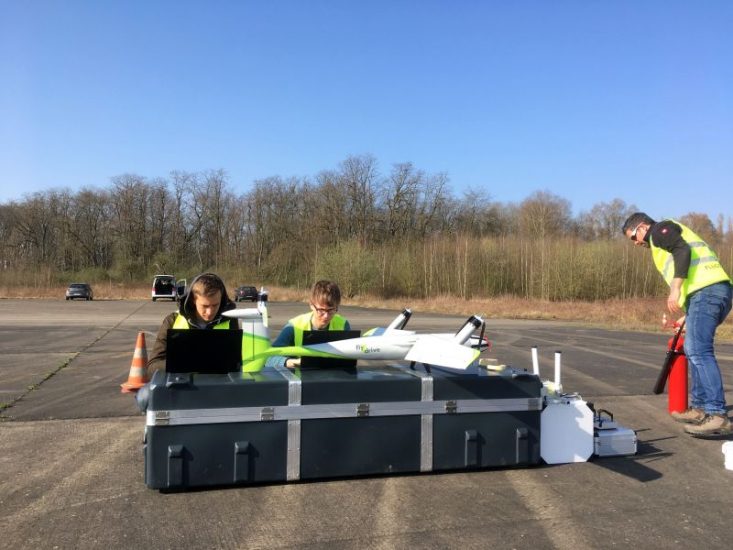 Partners in SESAR’s SAFIR-Med very-large demonstration project showed how to handle conflicts in flight planning of different UAVs at the DronePort test centre at St Truiden, Belgium, in a final demonstration event. The project operated a heterogenous fleet of multicopters and fixed-wing drones, which have very different operational envelopes. flyXdrive’s TW-Neo tiltwing UAV participated in the demonstration, combining VTOL capabilities on the one hand and a long range with payload at a high cruise speed in a single vehicle.

The transport of medical goods is only one example of UAS application in a centralized environment. When multiple UAS use the same distribution center as their departure location or flight destination, conflicts may occur in the usage of airspace or landing platforms. This issue can be partially addressed by (complex) 4D flight planning, which means to plan the flight trajectory not only in terms of location and altitude, but also in time. Even then, the real flight trajectory is impacted by external factors, such as unpredicted wind changes, resulting in deviations from the original flight plan and time. Reaching a target before or after the scheduled arrival will of course result in conflicts in heavily frequented locations. For this reason, de-risking capabilities are a fundamental component of robust UAS operations.

Within the SAFIR-Med project,  a central Command & Control Center system (C2C, product of Helicus) manage operations in medical support. This C2C enables coordination of their Beyond Visual Line of Sight drone flights (BVLOS) through interfaces with U-Space services provider (USSP) which is in charge of integration of “medical drones” with other drones’ activities in a safe manner via flight authorizations delivery and traffic information provision.

Together with drone manufacturers and further project partners, an operations scenario with two artificial conflicts was created. The conflicts were detected by the U-Space System and then were solved by altering flight plans for UAVs still on ground and airborne in real time. The scenario gained additional complexity due to the diversity of the used UAVs. The TW-Neo’s cruise speed, for example, is about three times the speed of the used multicopters (e.g. used by SABCA and TU Delft).

The de-risking demonstrations started in February 2022 with all SAFIR-Med partner manufacturers following the Helicus operations procedures.  For this the crews of all manufacturers were trained under a single Helicus operations manual, including specific procedures for multi crew coordination.  The first joint physical flight test took place on 23/03/22 at Droneport with three simultaneous drones in the air.  A series of integrated U-space demonstrations took place during a 1/04/22.  Derisking excercises took place as planned where the drone manufacturers connected their systems in a procedural tabletop exercise to the central C&C. For flyXdrive, this e.g. implies to use a complex real-time simulation of the UAV in the loop to provide realistic telemetry and positional data to the Helicus/operator as well as to the Unifly U-Space system supporting USSP tasks. Nevertheless, the artificial conflicts were successfully detected by both C2C and USSP, and orderely solved, by changing flight altitudes or adapting departure times (change in the flight authorisation, then, instructions given to drones pilots). The necessary telemetry data of all drone flights was forwarded to Unifly, which makes operations visual for other operators to ensure an overall safe environment.

The different SAFIR-Med drones, including the flyXdrive tilt-wing UAS TW-Neo took part in several flight tests and simulation-based table-top exercises at the Droneport (St. Truiden, Belgium) to demonstrate the de-risking functionality. During all flights, the TW-Neo connects to the cloud-based (flyXdrive) ground control system (GCS) enabling flight monitoring and telemetry transmission to the central Command & Control Center. This C2C then connects to U-Space services providers (USSP) like SkeyDrone and Droniq to obtain flight authorisation and to be provided with traffic information.  As responsible operator, Helicus together with Air Traffic Service Provider, skeyes, organised testing of connectivity and procedures in real flights for all involved partners. E.g., the TW-Neo showed a singular flight using the complete flight envelope and simultaneous flights in parallel with the SABCA and TU Delft Systems.  NSX ensured highly performing interfaces between Helicus C2C and the manufacturing partners.