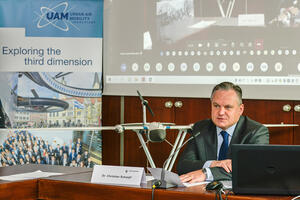 The Bavarian Council of Ministers in Germany is supporting the Urban Air Mobility Initiative in Ingolstadt with an EUR100 million grant. A year ago, Bavaria started a nationwide Hightech Agenda (HTA) programme and is funding the development of the latest technologies with EUR2 billion. This also includes the Air Mobility Initiative in the Ingolstadt area, for which EUR15 million will be made available in the coming year, EUR25 million in 2022 and a further EUR 60 million in the following years.

According to Lord Mayor Christian Scharpf: “EUR100 million as additional support for the Urban Air Mobility Initiative of the Ingolstadt region – that is a strong signal from the Free State that we are very pleased about!”

“It is a clear commitment to this regional initiative, which over 70 German and international partners have now joined. The basis is now being laid to vigorously expand Bavaria’s position as a technology leader in the field of urban air mobility while at the same time supporting economic diversification in Ingolstadt and the districts of Region 10. The Ingolstadt region is thus taking another important step towards becoming a model region for the transformation process in mobility. We are also very grateful to the Free State for the new building at the Technical University of Ingolstadt and the earlier occupation of the digital chairs in the field of artificial intelligence. Both serve to further strengthen Ingolstadt’s science location.”