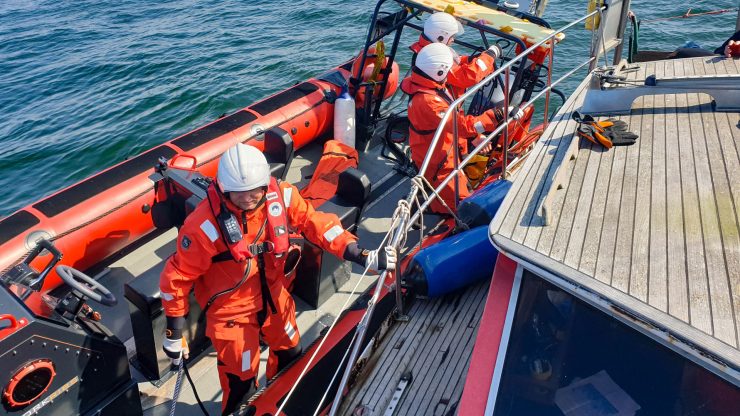 Participants in the Gulf of Finland U-space (GOF USPACE) programme dynamically modified a drone flight plan in-flight within a UTM system during an exercise simulating a marine search and rescue operation on 13 August 2019. This was the third trial conducted this summer for GOF USPACE, a series of drone trials organized by Estonia and Finland within the European Network of U-space Demonstrator Projects led by Eurocontrol, the European Commission, and SESAR JU.

The GOF USPACE demonstrations have focused on complex drone operations involving multi-country coordination and beyond visual-line-of-sight (BVLOS) flights. Organized by the Estonian air navigation service provider EANS, the Estonian Police and Border Guard, and other partners, the August 13 trial showcased how drones can provide assistance to search-and-rescue operations far from land as an enhancement to traditional manned aircraft and rescue vessels. To increase the real-world applicability of the flights, the trial was conducted as part of an actual joint maritime exercise organized by the Joint Rescue Coordination Centres of Estonia, Finland, and Sweden, which provided manned helicopters and rescue sea vessels for the trial.

The scenario assumed the collision of two recreational boats off the coast of Hiiumaa, an Estonian island, leading to missing people at sea and a resulting multi-country rescue response. To support this response, the AirMap UTM patform was integrated into a camera-equipped drone tasked with locating a lost person in the water. Additionally, the AirMap UTM patform was integrated into a drone carrying safety equipment to the site of the victim. While the equipment-carrying mission was already underway, the Estonian Police and Border Guard sent a radio command to the drone operators with new search area coordinates based on the real-time missing person search in progress. The operators of the safety equipment drone were able to make this flight plan adjustment within the AirMap interface and carry on the mission without interruption.

The flight plan modification appeared on the AirMap UTM Administrator Dashboard viewable by the search-and-rescue authorities. Using the dashboard, the Estonian authorities could visualize the new operational flight plan and facilitate further re-planning of the search areas. The trial provides an important demonstration of how U-space can enhance public safety operations in unpredictable emergency scenarios.

The latest GOF USPACE trial comes after partners carried out test flights in Tallinn in June 2019 which demonstrated drone operations within dense, urban airspace and showed how several UTM systems supporting different drones can communicate and coordinate within the same airspace. Further trials and demonstrator projects are planned during 2019.