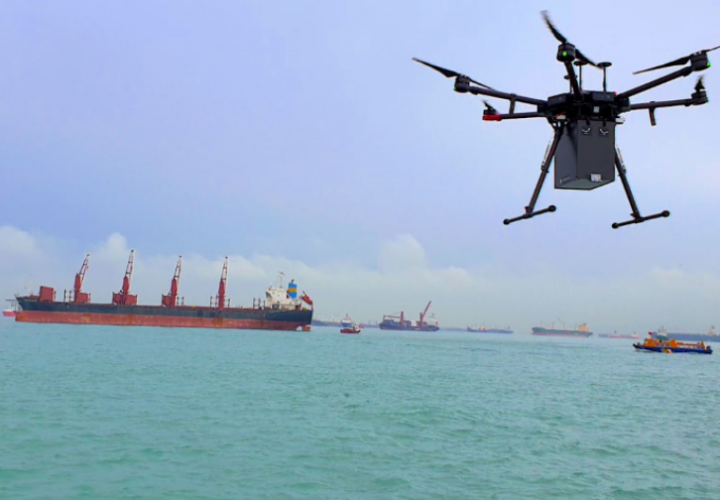 F-drones reports it has completed the first commercial BVLOS drone delivery in Singapore on 19 April 2020. The drone delivered 2 kg of vitamins over 2.7 km in 7 minutes, to a ship managed by Eastern Pacific Shipping (EPS). EPS, which is one of the world’s largest privately-owned ship managers, is F-drones’ first paying customer.

“In Singapore, like in most parts of the world, a BVLOS authorisation or permit is required when operating drones beyond the visual range of drone pilots. Without which, commercial drone delivery services would not be viable.  F-drones is the first company in Singapore to receive an authorisation from the aviation authority, to conduct BVLOS drone deliveries to ships in Singapore. For now, this is limited to drone deliveries to ships anchored south of the marina area. This already is a significant milestone for both F-drones and Singapore, as globally, there are only a handful that are operating commercial BVLOS drone deliveries. And F-drones is already working towards expanding their area of operations.

“Started little more than a year ago, F-drones is a home-grown startup developing large-scale delivery drones which are fully electric and autonomous. Their goal is to eventually use their proprietary drones, which would be able to send 100kg loads over 100km to ships and offshore platforms. This would help alleviate the pain of sending supplies in marine & offshore applications, which rely on small boats and helicopters….For now, F-drones is using an off-the-shelf drone which can only deliver 5kg loads over 5km.

“F-drones plans to complete the development of its 100kg-100km drone in the second half of 2021. Its latest prototype, which is its third, named as Hyperlaunch, would be able to deliver 5kg loads over 50km to ships. F-drones will be starting commercial operations using Hyperlaunch towards the end of 2020, after more tests and improvements. Hyperlaunch in itself is already an attractive product for the shipping industry.”