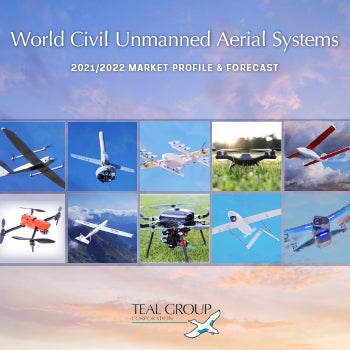 Teal Group’s 2021/2022 World Civil UAS Market Profile and Forecast projects that the US will integrate unmanned systems into its national air space within the next decade, but it is difficult to specify in which year that will occur. The US has made significant strides over the last year says Teal Group, publishing regulations for UAS operations at night and over people. The lack of a regulatory regime for beyond visual line of sight operations, though, continues to hold back market growth.

The report forecasts that non-military UAS production will jump from USD5.6 billion a year to USD18.9 billion by 2030, a 14.1% compound annual growth rate in constant dollars. Total civil UAS purchases will reach USD121 billion over that decade. The study includes annual forecasts of commercial, consumer and civil government systems and individual submarkets. Teal Group, an independent aerospace and defense research and analysis company, has provided support for the Federal Aviation Administration (FAA) in the preparation of past annual commercial UAS forecasts.

Civil Unmanned Aerial Systems (UAS) will be the most dynamic growth sector of the world aerospace industry this decade as nations open their airspace, commercial applications take off, and civil governments adopt systems for new roles in border security and public safety.

According to the report, commercial drone use will drive the market as consumer drone purchases slow and government purchases remain a small but growing portion of the market. “Major corporations have really begun to figure out how to employ UAS in their daily business, and have been rewarded,” said Jeremiah Gertler, Teal Group’s senior analyst and author of the study. “At the same time, near-saturation of the consumer market and the growing capability of lower-end, especially ‘prosumer’ drones have led UAS manufacturers to search upmarket for their next big opportunity. That means a greater focus on more sophisticated, higher-value units,” Gertler added.

The greatest potential appears to be the delivery market, which has the possibility of touching every household in the world. At the same time, it will also have to operate in the most complicated regulatory environment, with not just national bodies but localities and even homeowners’ associations having a say in whether and when delivery drones appear in neighbourhoods. Delivery is expected to be the leading sector in the United States by 2030. Agriculture will be the leading sector overseas by 2030 thanks to heavy Chinese investment in subsidizing agricultural drone spraying and increasingly capable but more affordable UAS moving into the sector, particularly for smaller farms.

The pandemic has spurred development of delivery drone systems and has encouraged companies to adopt UAS to do distance inspections of facilities. Yet the regulatory environment has artificially stifled demand, keeping UAS out of a number of valuable roles as nations struggle to figure out how to incorporate unpiloted aircraft into their air traffic management systems. At the same time, major aerospace companies are cutting investment in next generation systems, and several customer sectors are slashing capital spending. The result is a high level of unsatisfied demand for systems, especially at the higher end.

As unmanned systems proliferate, venture funding has flowed into UAS-adjacent efforts like analytical software to handle the data coming from unmanned systems and control networks. US start-ups have received 65% of the funding over the last 10 years, enabling them to take the lead in development of drone analytics. Chinese firms, which have received 16% of the investment, are focusing on continuing their lead in hardware, moving from consumer to commercial systems. Major Chinese players are having to adapt to a new reality as they move upmarket, as they are trying to enter markets already controlled by established players rather than creating and dominating new sectors as in the past.