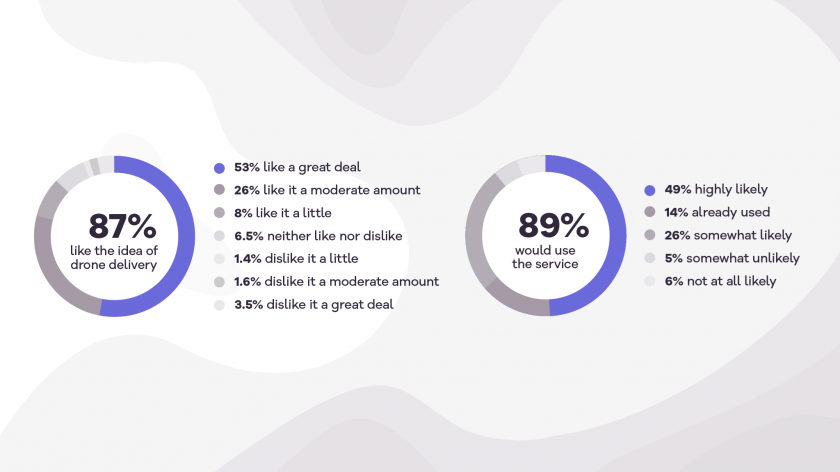 Drone delivery company Wing has reported on the findings of a Virgina Tech poll of inhabitants who have experienced drone services in their area. According to the poll, 87% of respondents are in favour.

“Pollsters have asked the public in the U.S. and Europe for their attitudes toward drone delivery a number times in the past ten years,” says Wing. “While the results of the surveys vary – support for drone delivery ranging from 23%1 to 50%2 – all of them have one thing in common: they were conducted among respondents who had never seen, much less received, anything delivered by a drone. Today, researchers at Virginia Tech published the results of the first survey conducted among residents in a city with an active drone delivery service, and the results are quite interesting.

“Virginia Tech conducted its survey among residents of Christiansburg, Virginia; a community of just over 20,000, where Wing has operated a residential drone delivery service five days a week since October 2019. According to Virginia Tech’s survey of over 800 residents, 87% of respondents have positive sentiments about drone delivery; 89% report that they would likely use the service if it were available; and 87% say they view drone delivery equally or more favorably than other drone applications. The survey was reviewed and approved by the Virginia Tech’s Institutional Review Board, and the findings were published today in the spring issue of Issues in Science and Technology.”

Wing believes these results are part of a global trend of approval of drone operations among communities who have direct experience of the operation.

“The findings echo the growing popularity of drone delivery worldwide. Across the four cities on three continents serviced by Wing, deliveries in 2020 increased by 500% over 2019. While that growth was spurred in part by stay-at-home restrictions resulting from COVID, the use of Wing’s delivery services remained well above pre-COVID levels in all markets even as restrictions were eased. Most strikingly, in markets where there are no current restrictions, such as Australia, the use of Wing’s service has continued to increase. The use of Wing’s service in Australia, and worldwide, increased more than 5X in the first three months of 2021 compared to the same period a year ago.