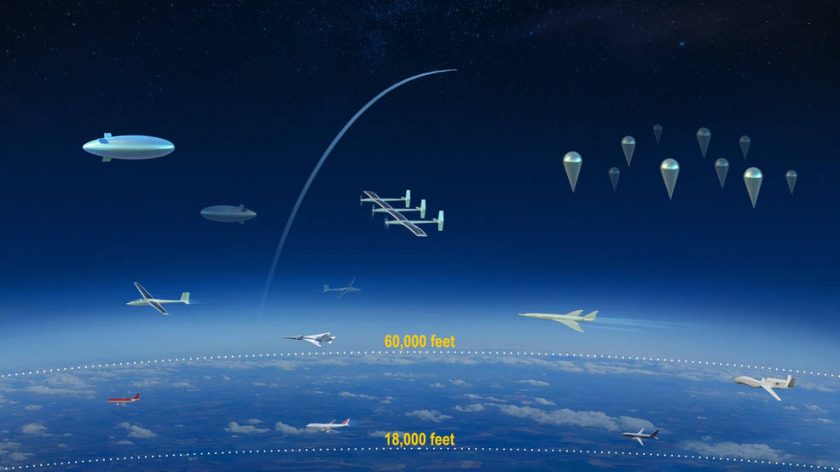 According to the NASA blog:

When flying on a commercial airliner, it can feel like you’re on top of the world, riding higher than any airplane out there. But an increasing number of aircraft soon will be flying even higher and NASA is studying ways to manage that anticipated air traffic. Ranging from research balloons to military aircraft, these vehicles operate 60,000 feet above sea level – about twice as high as commercial airliners at cruising altitude.

Designated in the United States as “upper Class E” airspace, the sky above 60,000 feet does not have stringent air traffic control rules since the vast majority of current aircraft are not capable of climbing to this edge-of-space altitude. There just aren’t that many vehicles that need to be kept separated up there by air traffic managers. However, this is likely to change in the near future. With commercial supersonic travel expected to take off, as well as plans for more high-altitude vehicles, the number of aircraft that can reach this altitude will soon require specific rules of the road.

As a collaboration between NASA, the FAA, and industry partners, ETM also will investigate how to modify and implement successfully proven concepts developed for Unmanned Aircraft Systems (UAS) Traffic Management (UTM) to the unique skyscape of upper Class E.

During the recently concluded UTM project, NASA researchers developed and experimented with a new airspace management system in which multiple parties work collaboratively to plan and organize the rising number of uncrewed drone flights at low altitudes – preventing conflicts with other aircraft operations. Now, these same concepts are being examined for use in upper Class E airspace.

Who (or What) Goes There?

In the United States, the FAA organizes airspace into six categories – Class A, B, C, D, E, or G.

Class A airspace exists between 18,000 feet and 60,000 feet. The immediate vicinity of a major airport hub would be Class B airspace, which carries the most stringent rules of entry and separation enforced by Air Traffic Control (ATC). A municipal or regional airport may have a Class C or D designation, which are less stringent than Class B.

A rural area far away from an airport that is still controlled would be Class E. Class G designates airspace below either 1,200 feet or 700 feet that is not otherwise actively controlled and relies on pilots to follow established rules to remain safely separated from each other.

Due to the comparatively sparse activity above 60,000 feet, the FAA deems the airspace Class E – appending the prefix “upper” to distinguish it from the Class E airspace that exists closer to the ground.

Some of the aircraft that will populate upper Class E airspace in growing numbers are slow-moving vehicles that could present an obstacle for the larger, faster aircraft that also operate in the thin air above 60,000 feet.

High-altitude balloons are one type of slow-moving vehicle. These unpowered balloons are designed to float in upper Class E airspace for missions such as providing communications during disasters and studying the atmosphere. Since they are unpowered, these balloons drift with the wind over time from place to place.

High Altitude Long Endurance (HALE) aircraft will be another slow-moving occupant of upper Class E airspace. These powered, uncrewed vehicles are currently being designed and tested to embark on missions such as providing communications in remote areas. They will fly above various locations and can stay airborne for weeks or months at a time.

Finally, supersonic aircraft use upper Class E airspace to achieve high speeds and burn less fuel. Currently, almost all these flights are military, but commercial supersonic travel is set to return in the coming years. Additionally, suborbital spaceflights are on the rise and also use this airspace for part of their journey.

Herein lies one of the core reasons for ETM’s research. Though overall more agile than a high-altitude balloon or HALE aircraft, these supersonic vehicles cannot plausibly make pronounced turns on short notice to avoid other vehicles at the extreme speed and altitude they achieve in upper Class E airspace.

Just as the airspace immediately above our communities is host to everything from helicopters to commercial airliners, upper Class E airspace will soon contain a multitude of vehicles with different missions. The question becomes: how can this airspace be managed in the simplest, most effective way?

The Rules of the Road

The solution may come from ETM researchers investigating using the concept of a service-oriented, cooperative airspace system developed by NASA during the UTM project.

That information is used by airlines to determine efficient flight paths and the FAA to safely maintain aircraft separation by giving those aircraft specific instructions to follow.

In a cooperative service-oriented airspace system like the one ETM is researching, however, the operator of each vehicle – whether that operator is on the ground or in the cockpit – will be responsible for sharing this important information with other operators through an interconnected digital ETM architecture before and during flight.

Thus, vehicles like unpowered balloons and long-duration HALE aircraft can be taken into account by other operators during the flight planning stage – long before a potential separation issue arises.

When a conflict does arise between two vehicles, either during pre-flight planning or during the flight itself – operators will follow rules of the road established by the FAA to resolve the issue on their own based on data from the FAA, other airspace data service providers, or other operators themselves without live input from an air traffic manager.

“The result is that everyone knows what’s happening, separation issues are addressed long before they could become a problem, and a safe and harmonized airspace is established,” said Dr. Jaewoo Jung, NASA’s manager in charge of this ETM research at NASA’s Ames Research Center in California.

A Day in the Life

Based on current concepts, here is how that harmonized airspace could work:

The pilots of a commercial supersonic airliner create a flight plan to their destination before departing, determining the best possible route to take. Just like other aircraft, they plan their passage to and from 60,000 feet with information and clearance from ATC.

For the upper Class E segment of the journey, however, the pilots use information from ETM’s interconnected system to make their flight plan, relying on information provided cooperatively from everyone expected to operate in that airspace during their flight.

Scanning the airspace ahead of time, they observe that on the direct path to their destination, a HALE aircraft will be circling at 65,000 feet doing a weather study and a stray communications balloon has slowly drifted into the area from elsewhere.

Based on the information shared by the other operators, the pilots create a flight plan that takes their faster-than-sound jet safely underneath the HALE and gently steers around the balloon with no stress to the aircraft.

Their flight plan is filed with the FAA’s traffic managers and shared in the ETM system for all operators to see. They take off and climb to their upper Class E cruising altitude.

A short time later, on the other side of the country, pilots of a military aircraft are planning a flight in the opposite direction. The pilots go through the same process – noticing not only the HALE aircraft and the balloon, but also the commercial supersonic flight coming in their direction. They plan a route that avoids the air traffic.

The next day, the ground-based operators of the HALE aircraft are notified through ETM that the communications balloon is going to drift close to their airplane at the same altitude. Observing that there are no vehicles planning to pass through at 68,000 feet, they instruct their research aircraft to ascend and steer clear of the balloon.

This example, however, is contingent on specific rules NASA and industry will recommend to the FAA for possible implementation and eventual enforcement. “Mission-specific restrictions will be a factor as these right-of-way considerations are made,” Jung said.

Collaborative meetings between researchers from NASA and the FAA are defining the needs and objectives of creating procedures and regulations that provide the best solutions for the future users of upper Class E airspace.

“We have recently established a research transition team with the FAA, helping the agencies work together to take ETM to the next level,” Jung said. “We have been meeting regularly and have started conversations with potential industry partners.”

Another scope that is being taken into account is scalability to the global level.

As part of the FAA’s requirements, their air traffic managers must be notified of any high-altitude aircraft launched from U.S. territory. However, vehicles from other countries are not subject to the same requirements.

“Sometimes, research balloons launched from other countries and continents drift across whole land masses and oceans in a matter of weeks. The global scale comes into consideration,” Jung said.

Though the FAA only oversees the skies above the United States, and any initial ETM system would be created for U.S. airspace only, an ideal ETM model could be expanded to a larger system – i.e., global airspace – and still function practically and seamlessly.

But first, researchers are transferring research and knowledge over to ETM to the best practical extent. Many of the collaborative principles of UTM are being leveraged for application to ETM.

“At a foundational level, UTM and ETM will work similarly – making sure that even at the intent-level, conflicts are resolved,” said Jung.

As part of the Air Traffic Management – Exploration project in the Airspace Operations and Safety Program, ETM and UTM both envision and experiment with novel concepts and research for organizing the skies of tomorrow.

(Image: The illustration shows examples of the types of aircraft that can be found flying more than 60,000 above sea level. Known as upper Class E airspace, NASA and its partners – including the FAA – are developing technology and procedures that will help safely manage traffic at these altitudes.