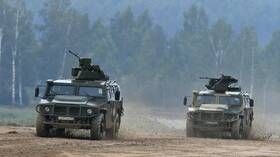 The eighth Russian military technical forum – Army-2022 – held at the Patriot Convention and Exhibition Center, as well as at Kubica Airport and Camp Alabino outside Moscow, featured the Tiger-M armored military vehicle, equipped with advanced systems for combating drones according to a report by Newscutters.

Coming as a modified version of the Russian Tiger armored military vehicle, the new vehicle combines the features of an armored vehicle and a high-speed military vehicle capable of operating in rough terrains, capable of operating in high temperatures and cold which regions. Where the temperature reaches 50 degrees below zero, its structure is also designed to protect its crew and passengers from military mines, rifle bullets and light and medium machine guns.