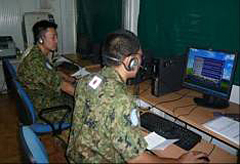 According to an article published by Kyodo News, Japan continues to expands it electronic warfare capabilities in response to military build-up by China and Russia. A new unit has been established to managed related divisions across the country, based at Saitama Prefecture. The unit is tasked with detecting and analysing potential adversaries’ communications and radar emissions. It will also be responsible for disrupting enemy communications and radar if called upon, says the report.

According to information published by The Defense Post, the Japan Ground Self-Defence Force (JGSDF) has established the unit to “detect, analyse, and disrupt adversary electromagnetic communication and radar signals”

Military units are equipped with vehicle-mounted network electronic warfare systems (NEWS) to jam enemy radio waves in an integrated manner. The NEWS detects electromagnetic communication frequencies of aircraft and vessels around Japan during peacetime and is capable of detecting and jamming “enemy missiles, drones and other battlefield assets” during a conflict, says the newspaper.