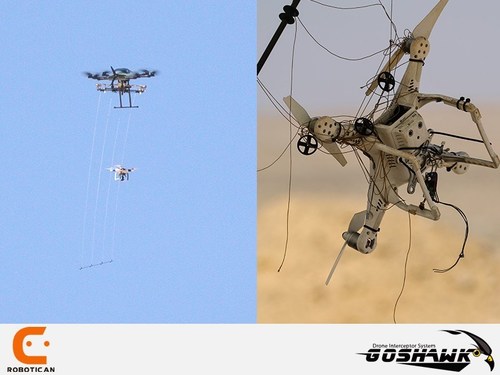 Robotican reports successful execution of an interception scenario together with Matrix, the Yeruham municipality, and Ayalon Highways on behalf of the Israel Ministry of Transport. The test was based on a scenario in which a drone deviates from its approved flightpath from the Snir national UAV & drone test range while threatening to penetrate Yeruham’s airspace and endanger innocent bystanders. Robotican’s Goshawk intercepted a simulated “out-of-control” drone that flew towards the city. The Goshawk drone was launched and autonomously intercepted the drone before it reached the city’s limits.

The Goshawk system is designed to prevent drones displaying irregular flight behaviour from reaching a predefined safe zone and created a “safety shield” between the test grounds and Yeruham – or any other location the test drone was not intended to reach.

Hagay Balashi, Robtican CEO, said “The success of the test is an important milestone for the safety of a drone’s nonlight-zone concept using intercepting drones to prevent uncontrolled “leakage” and collateral damage.”

Robotican’s Goshawk system is an autonomous system developed to intercept and capture hostile or unrecognized drones. The Omer-based company’s system reduces collateral and peripheral damage by capturing and diverting the aircraft to a predefined location. The computer-operated system launches from its mobile launch pad, which enables 24/7 operational capabilities and enforcement of drone traffic laws in future air spaces.