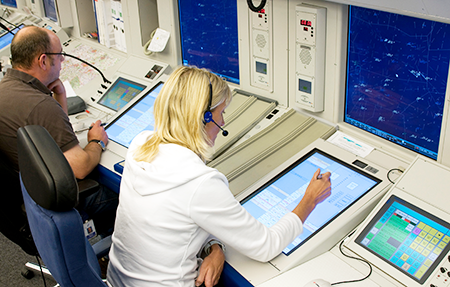 World ATM Congress Drone incidents reported by pilots more than doubled to 158 in Germany compared to the prior year, according to a press statement by German air navigation service provider DFS Deutsche Flugsicherun

In response, DFS has developed an interface for data communication between its UTM and drone detection systems used for preventing disruptions caused by “bad” drones.  In February, DFS and Rheinmetall, Germany’s largest supplier for defence technology, tested an integration together with the Bundeswehr, Germany’s armed forces. Air traffic data were exchanged with advanced radar systems, with acoustic and infrared sensors, and with optical equipment to detect a potentially threatening drone. A catch-and-carry drone threw a net over the disruptive drone and took it to the ground.

“Drones offer so many positive aspects over conventional methods,” said Thilo Vogt, Head of UAS/UTM Development and Solutions at the German air navigation service provider DFS. “However, drones also pose a growing risk to air traffic. The aviation world is at a turning point. Integrating drones into the airspace opens up new worlds – but also poses new challenges with regard to safety.”

The DFS/Deutsch Telekom UTM system is an advanced version of the air traffic control system Phoenix, a DFS in-house development which can process position data from a range of sources. Drones equipped with a special LTE transponder connect to the mobile network and transmit their position to the UTM. The UTM system then displays the air situation, shows surrounding traffic and warns of potential conflicts. Protected areas, for example around airports, can be displayed. The UTM system is highly automated and provides the required information to all parties involved. Air traffic controllers receive the data they need to ensure safety in airspace. Airspace users can see each other and can be seen. Even position data of VFR aircraft (via FLARM and ADS-B) are provided. Drone pilots can receive information over a web interface and manage their flights using a tablet or smartphone.