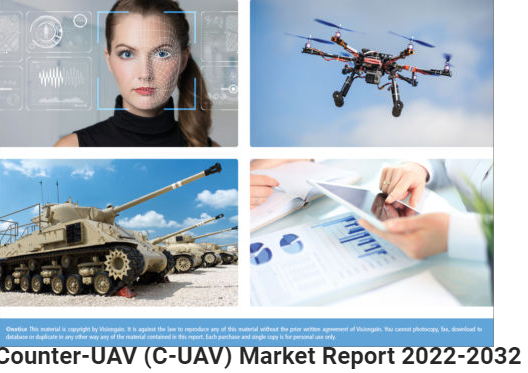 The 520-page report includes 360 tables and 355 charts/graphs highlighting key areas with analysis of global, regional and national sales and growth says the company.

Rising Adoption of Kinetic Counter UAV Systems
The kinetic counter-drone approaches work by actually taking down a drone. These strategies typically cause the drone to fall to the ground quickly, making it an inappropriate countermeasure to utilise in busy locations. Although using it in busy places might not be the best idea, it might work in other circumstances. To completely eliminate drones, military forces around the world use kinetic counter-UAV technologies. It makes use of anti-drone gravity lines or nets, which are frequently launched by a UAV or compressed air. These devices support the drone’s capture, neutralisation, or annihilation. There are times when unidentified drones are sent inside military boundaries to scan the area or keep an eye on the enemies’ actions.

What are the Current Market Drivers?

Rising Incidences Of Security Breaches By Unidentified Drones
In recent years, drones have been utilized more and more for aerial photography, search and rescue missions, agricultural, and surveillance and monitoring. A number of nations, including the US, Brazil, and China, have passed laws regulating and limiting the use of drones. Unknown drones have violated security at several places, including military installations, airports, and jails. As a result, the market for drone defence systems has experienced a significant increase in demand.

The Advancements in the Capabilities of UAVs
A fixed-wing, rotary-wing, or airship platform that is capable of maintaining flight along a specified path without the aid of an on-board pilot is referred to as a UAV. A few applications of UAV technology include environmental monitoring and protection, meteorological surveillance and weather research, agriculture, mineral exploration and exploitation, aerial target systems, airborne surveillance for military field operations, and reconnaissance missions. Unmanned small-scale helicopters are perfect for challenging jobs like traffic or volcanic region surveillance, thorough area mapping, video footage recording, and crop dusting or spraying because they don’t require a runway.

Where are the Market Opportunities?

Need to Develop Versatile and Scalable Anti-Drone Systems
When drone identification criteria aren’t too strict or to protect minor sites, counter UAV systems with a limited range can be used. The system is equipped with the bare minimum needed to identify unmanned aerial vehicles (UAVs) at close ranges of under 200 metres. The compact anti-drone system comprises of a server, proprietary software, and up to 32 video cameras (four for minor installations like sports stadiums, up to 32 for larger ones like individual buildings). The programme employs particular algorithms to identify drones and tell them apart from birds in order to reduce false alarms. The compact anti-UAV system may be updated and used with RF detectors to pick up drone control signals (such as DroneWatcher).

Strategic Initiatives by Major Players
The market’s participants are developing new items and have long-term agreements with governmental or military organisations. A new strategic partnership between Northrop Grumman Corporation and Echodyne, a company that develops radar platforms, as well as a minority investment, expands on prior attempts to incorporate Echodyne radars into certain Northrop Grumman advanced military and security technologies. The initial area of cooperation will indeed be counter-UAS, wherein Echodyne’s radars are anticipated to immediately contribute to the achievement of the mission due to their effectiveness and SwaP advantages. Under the provisions of the Agreement, the Parties shall cooperate to identify new applications for the commercially developed radars of Echodyne. In order to battle larger and faster unmanned aircraft system (UAS) threats at a greater range, Boeing [BA] said that it has delivered improved Compact Laser Weapons System (CLWS) units to a Defense Department client.