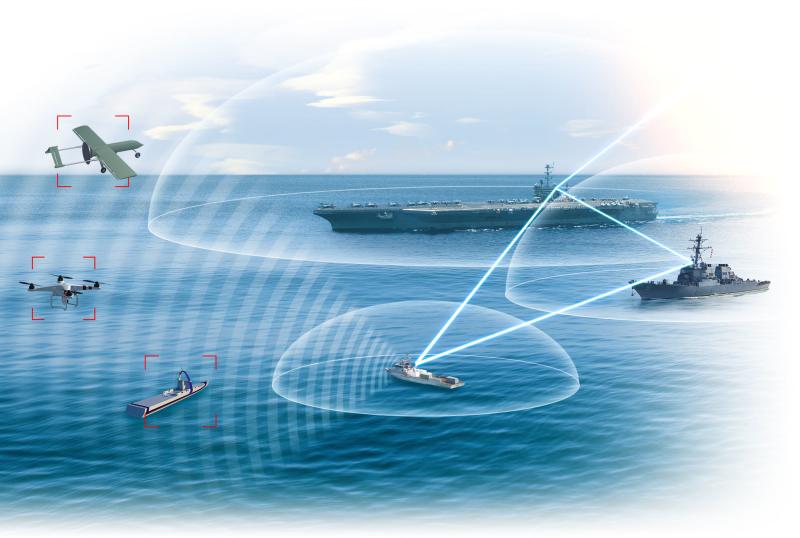 CACI’s suite of tools, including CORIAN, BEAM, and Falcon, are modular open systems that can interoperate between ship and shore.  The maritime C-UAS solutions are built around three interoperable technologies that provide kinetic and non-kinetic effects and can be integrated into shipboard systems and enterprise networks alike:

According to the CACI press release, these technologies deliver layered defenses against any UAS threats from sea to shore. In a port scenario, CORIAN can initiate detect, identify, and track operations on a single UAS while working inoperably with BEAM units to determine the UAS’s direction and identity. At sea, BEAM and Falcon can collaborate to perform detect, identify, and track operations against an sUAS threat, with the BEAM operator engaging in link-jamming mitigation or creating a safe landing zone for the drone.

CACI adds: The UAS threat is racing ahead of current defenses and countermeasures in the maritime domain. Hundreds of incursions by sUAS have been recorded in the past few years against U.S. Navy ships operating in controlled airspace around ports and facilities and while at sea. In 2019 off the coast of San Diego, a group of four sUAS swarmed the destroyer USS Paul Hamilton, flashing searchlights at the ship’s bow and bridge several times. In 2017 near the port of Hong Kong, U.S. Navy ships were repeatedly harassed by multiple sUAS, with one landing on the starboard side deck of the USS Chafee while it was sailing into port.

According to CACI,these and many other similar incidents underscore the gap in maritime defenses against smaller UAS. While US Navy, US Marine Corps, and US Coast Guard ships feature a range of defences against manned aircraft, gaps persist in capabilities that effectively target drone threats. Iranian-made drones in the hands of militaries and non-state actors prompted US Central Command in early 2021 to label the proliferation of small armed drones in the Persian Gulf region as one of the most concerning tactical developments in the theatre – on par with improvised explosive devices (IED). On the other side of the world, UAS incursions increasingly concern our Asia-Pacific allies, who see a Chinese naval force that continues to project its influence over the region’s waterways and choke points – often using new UAS systems to perform ISR tasks and test defences.