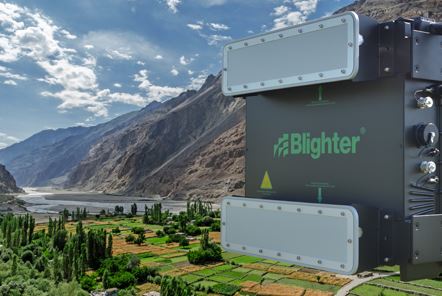 Dat-Con has integrated the Blighter radar, cameras and other sensors into its own command and control (C2) system. Sensor information from its C2 system is integrated with the CIBMS system to alert quick response teams (QRTs) of the Indian Border Security Force for action. Dat-Con has partnered with in-country Pune-based Ador Powertron for this pilot project.

The Blighter radar’s wide elevation beam was a key feature for the Indian CIBMS project as it ensures that the radar can operate effectively in all terrains allowing the hills, mountains, plains, riverine territories and marshes to be scanned simultaneously, without the need to tilt the radar.

The solid-state passive electronically scanned array (PESA) radar detects small and slow-moving targets, even in cluttered environments, due to the radar’s coactive frequency modulated continuous wave (FMCW) micro Doppler fast-scan processing. The radar delivers a 24x7x365 all-weather persistent surveillance capability. It can detect and track a walking person at 11 km (6.8 miles), a crawler at 4.6 km (2.9 miles) or a large moving vehicle at 25 km (15.5 miles) and then cue a camera system to follow and identify targets.

Blighter Surveillance Systems has now sold hundreds of its E-scan ground surveillance radars across 35 different countries. It has systems deployed along the Korean demilitarised zone (DMZ), on the US Southern border, in several Middle Eastern countries, and now in India too.