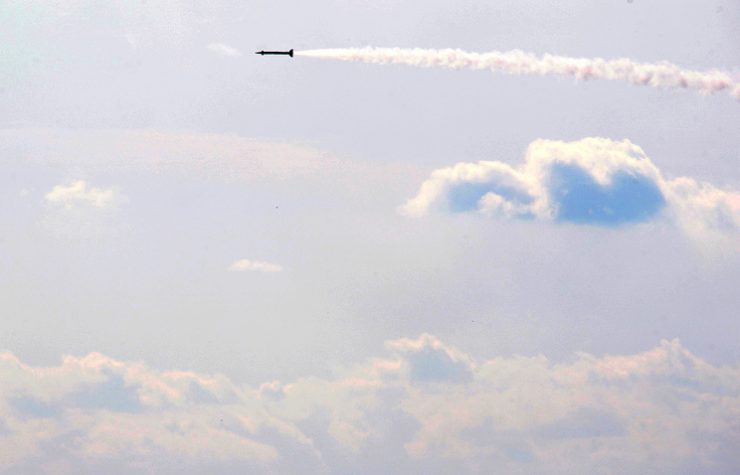 According to the republic’s State Military and Industrial Committee:

“The new surface-to-air missile system developed by specialists of BSVT – New Technologies has been created to provide air defence for military and industrial facilities, land troops’ units and formations, and also to strike small-size air targets, including unmanned aerial vehicles,”

TASS reports that the TRIO system comes as a response to the rapidly developing sphere of small-size drones in the world, considering that “a number of existing air defence systems are unable to fight them efficiently,” the company explained. The specialists developed the new system using the modernized combat vehicle of the 9K35 Strela-10 short-range missile system and the ZSU-23-4 Shilka self-propelled surface-to-air missile complex. They also added the Berserk robotized machine-gun system based on quick-firing aerial guns.

“The TRIO’s guns supplement each other, which allows it to efficiently destroy small-size air targets of various types, including mini-drones,” the developer company said.

“The new system’s weapons are mounted on the tracked chassis, which enables it to move confidently across terrain with different types of soil. As its specific feature, the new air defense system features an information and computer complex that allows making the operation of a team of a platoon (battery) command post and its combat control fully automated. The system’s radar can carry out an all-round search for air targets in real time within the angles of site ranging from minus 7 to plus 70 degrees while the round-the-clock optical-electronic station is capable of spotting and tracking targets in the passive mode at a range of 20 km.

“The developers have also adapted the TRIO for firing modernized air-to-air airborne missiles capable of striking targets with a dimension of no less than 30 x 30 cm. The robotized machine-gun module with a firing range of up to 500 m and the firing rate of 12,000 rounds per minute is also designed to strike small-size drones.

The Belarusian specialists have called the TRIO air defense missile system “a relatively cheap complex with high combat potential.” The new system will be demonstrated at the Milex-2019 arms show in Minsk in May.