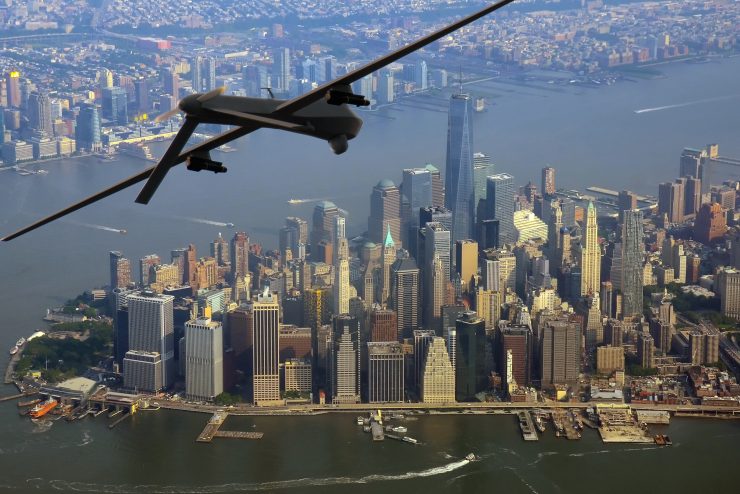 In the first of two articles, futurist writer Chris Stonor looks at the underlying cultural undercurrents which are driving the public’s views of drones – and, in part two, what can be done to change public opinion

“… I can see them in my eyes when they’re closed,

I can feel them at night,

I can feel them plot a course through the sky,

….raps best-selling and influential American hip-hop musician Jaime Meline aka EL-P during the chorus of his song, Drones over BKLYN. Meline who lives in the New York Borough told a music magazine, “When I wrote the track, it’s not like I’m making something up. Drones are policing American cities. We’re going to be in a fascist police state.” In another interview he added, “This is about a fever dream I had of drones hovering over my building, sniffing around, taking flicks, following me. A few months after I wrote this song, articles about local law enforcement using them in American cities started popping up.”

EL-P is tapping into a powerful cultural undercurrent which is global and growing. While for many in the industry drones represent a future transport solution which meets the challenge of climate change, reducing road congestion and pollution while offering faster and cheaper deliveries of medical and other urgent goods, the public has a very different view. And while on the face of it the key public perception issues are crime and misuse, violation of privacy, damage and injury alongside noise, underneath these concerns is a much more difficult and complex concern – artificial intelligence (AI) and autonomy.

It is rapper EL-Ps interests that may explain his own particular angst. An avid science fiction fan, especially the work of Philip K. Dick, George Orwell and Aldous Huxley, EL-Ps lyrics are full of dystopian warnings and paranoia over humanity’s future. Dick’s book Do Androids Dream of Electric Sheep, published in 1968, was turned, 14 years later, in to the science fiction film Bladerunner.  George Orwell’s novel 1984 (published in 1949) has sold over 30 million copies and is viewed by some as the ultimate dystopian novel. The story describes a future totalitarian state that brazenly misleads, deceives and controls the public through fear and mind control, but above all, by secret and sinister spying, leading to the infamous phrase Big Brother is Watching You. For technological surveillance leading to a loss of privacy, is the meat and drink of an apocalyptic future. Drones fit perfectly in to this threatening and malevolent landscape.  And Matt Groening creator of the TV series The Simpsons and Futurama adds, “In the future there will be tiny cameras everywhere and they’ll be flying around like mosquitoes. That will be bad. Drones are scary. You can’t reason with a drone.”

And that is the ultimate challenge for the industry. How can drone operators win over the hearts and minds of a concerned public when the focus of their missions is to deploy new types of remotely controlled or autonomous vehicles with which there appears to be no direct, human interaction?

According to a recent study by the DLR German Aerospace Centre (“The acceptance of civil drones in Germany”) crime and misuse – including terrorism and espionage – are the public’s major concern, scoring 91% of overall concerns, followed by violation of privacy (86%), damage and injury (72%) and over noise (53%). Alarmingly, 40% of the respondents want to ban delivery drones altogether within their communities. This research builds on the findings of a UK poll carried out by ‘Comres’ for the Royal Aeronautical Society (RAeS) in May 2016 where 44% opposed unmanned craft use for parcel delivery, 39% passenger transport, where two in five (40%) state drones pose more risks than benefits to the local economy.

A review of studies into public concerns with drones undertaken by Cristina Barrado of the Polytechnic University of Catalonia shows a wide range of further issues which need to be addressed – from association with the military, to the role of artificial intelligence, to safety of urban air mobility systems (https://www.eurocontrol.int/sites/default/files/2019-10/08-social-impact_0.pdf).

And here is another major issue of complexity – reactions to drone operations differ widely from community to community. They range from organised hostility (https://www.abc.net.au/news/2019-03-09/google-drones-group-of-angry-residents-in-australia-fight-back/10885254) and confusion over who has direct regulatory authority in areas of noise levels, environmental issues and privacy to euphoria (https://www.unmannedairspace.info/utm-industry-leader-interview/in-africa-the-drones-get-cheered-on-landing-interview-with-duncan-walker-of-skyports/)

For many in the industry the temptation is to develop a communications strategy based on stressing the benefits that these new technologies will bring to the public. But that alone will not be enough. The nuclear power and GM food industries are clear examples of potentially beneficial technologies whose business plans have been overturned because of poor messaging or a misunderstanding of public perceptions.

“I am not brought into the idea that just by demonstrating public good and the public will fall in line when they see the benefits from this, “ said David Tait, Innovation Strategy Lead with the UK’s Civil Aviation Authority, speaking at an October 2019 conference on urban air mobility. ”It’s much more about how do we demonstrate good citizenship than saying ‘we are going to provide you with a service.’”

Gaining a social licence to operate from the local community requires a much more considered approach to messaging by industry. It is easy to look at the way driverless trains have been quickly and easily assimilated into light rail systems across the world and assume drone operations along with remote control, autonomy and artificial intelligence-based systems will similarly be welcomed.

A recent opinion poll commissioned by the ‘World Economic Forum’ has found a sizeable proportion of the global public believes greater oversight is needed of the use of AI by governments and businesses – and this has important implications for the drone industry.

According to WEF: “the poll, which surveys the attitudes of over 20,000 people across 27 countries, 41% of respondents said that they were worried about the use of AI. This compares to 27% that disagreed and 32% that were undecided. One remarkable finding from the poll is that attitudes towards AI varied little across sex, age, income or education level. Slightly fewer men (39%) said they were concerned about the use of AI than women (44%). Respondents under the age of 35 were slightly less likely than those aged 35-49 and those 50 and older to agree with calls to further restrict the use of AI by government (38% vs. 41% and 41%, respectively) and for more regulation of business (46% vs. 50% and 50%, respectively). People with lower levels of education were just as concerned about the use of AI in general (42% compared to 41% for both medium- and highly-educated people), in favour of restricting government use (41% vs. 40% and 39%, respectively), and in favour of regulating business (48% vs. 49% and 49%, respectively).”

The scepticism towards corporate use of AI was diminished when it comes to governments, with relatively fewer people – 40% – believing current restrictions needed to be tightened up compared to 24% that disagreed with the statement.

These findings suggest the public are marginally more comfortable when government agencies deploy these new technologies than commercial entities, which is in line with many “drones for good” pioneering missions being adopted by government agencies around the world, with police services especially deploying drones primarily on life and money-saving search and rescue, traffic collision reconstruction, investigating active shooters/suspects, crime scene analysis and crowd safety monitoring operations.

In December 2018, the New York Police Department (NYPD) unveiled their drone unit of 14 craft and 29 officer operators. The NYPD informed the media the unmanned flights would be used primarily for monitoring giant crowds, investigating hazardous waste spills, handling hostage situations and reaching remote areas in crime scenes. They would not be employed for routine police patrols, unlawful surveillance, enforce traffic laws or be equipped with weapons. Frank DiGiacomo, NYPDs Deputy Inspector told CBS2 News, “We can’t have a cop in every location, so a drone above the crowd can tell if someone is in distress and needs help. We can then talk to and calm them down via the craft by letting the person know assistance is on the way. Meanwhile, we call emergency services or fellow police officers and direct them to the exact spot.” A number of people were helped this way during the display.

The NYPD Technical Assistance Response Unit (TARU) had earlier deployed a drone to converse with an armed suspect who’d barricaded himself within a 15th floor apartment. “We were able to talk to him via the craft,” continued DiGiacome. “He put the gun down, and we’re then able to get in there and give the person aid.” As for the line between security and surveillance, “We’re not zooming in on any faces,” NYPD Detective Deeu John added. “But if there is criminality going on, we can zero in and gain a more detailed description.”

Moving from life-saving missions to using drones equipped with face-recognition technology to identify suspects will require a fine line in messaging and across the industry lies the real shadow of military drone attacks which according to the Bureau of Investigative Journalism have killed between 769-1,725 civilians around the world (https://www.thebureauinvestigates.com/projects/drone-war) by US forces alone. But set that against the 22,000 lifesaving deliveries by drone organised by US company Zipline and the drone industry’s impact on global society can start to be measured in a more balanced way.

Thirty-two year-old Keller Rinaudo, a Harvard graduate, robotics entrepreneur and former professional rock climber, is the CEO and co-founder of Zipline. In 2016, the company signed a deal with the Rwandan government to deliver medical products via specially-designed drones from a distribution centre close to the Capital Kigali. Within a short time, they were delivering 30 different blood products to over 20 hospitals and had reduced blood wastage (a short shelf-life) from 7% to 0%, in all, transporting over 30% of the country’s supply. This included 400 emergency deliveries as 50% of blood is used for Post-Birth Haemorrhaging. The percentage increased when in 2018 Zipline opened a second centre in Kayonza, to serve eastern Rwanda. Today, 360 different medical products are being delivered around that region via several hundred disbursements per day. The company then expanded their service to Ghana in early 2019, where they now operate four distribution centres, delivering to over 2,500 hospitals and health facilities, covering 18 million people or 75% of the country’s population. Each centre has 30 drones and the capacity for 500 operations a day.

Yet, it is not just in Africa where the company are proving successful. Rinaudo says that the US has the highest rate of infant mortality in the West. Critical hospitals are closing at record rates in some rural areas and life expectancy is declining. Partnering with the Department of Transportation as well as the State of Carolina, in early 2019, Zipline implemented their first commercial drone healthcare deliveries to provincial regions in Northern Carolina as part of a major trial. Two other drone delivery companies, Matternet and Flytrex, are involved.

For Zipline, gaining a social licence to operate has not been a major challenge. In part two we will look at how the industry can adapt its communications strategies to show how commercial operators can also obtain support for the communities they wish to serve.