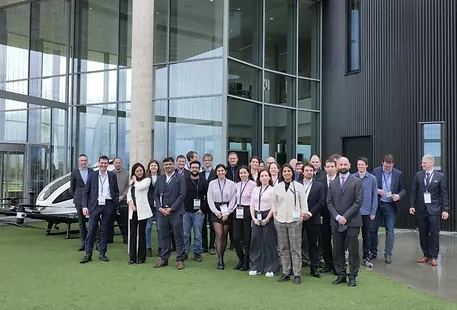 Closing off the first series of flight trials as well as testing sessions of technologies developed to ensure the necessary flow of information between use cases actors, the SAFIR-Med consortium organised a medical aviation conference in Sint-Truiden, Belgium, hosted by Droneport test centre in early April 2022. The event, organised by Future Needs and the SAFIR-Med project partners, brought together the medical and aviation sectors to demonstrate how the SAFIR-Med project advances the state-of-the-art in European U-space achieving safe, sustainable, socially accepted and effective urban air mobility. During the conference, objectives, innovative solutions and concrete actions conducted to achieve SAFIR-Med project were presented and the development of a framework of UAM indicators to help cities evaluate and monitor the impact of U-space implementation was announced.

Safe and flexible Integration of Advanced U-space Services for medical Air Mobility (SAFIR-Med) is a European research and innovation project that for more than one year is bringing together representatives from the entire urban air mobility value chain as either project partners (ANSP/ATC, USSP, Operator, UAS Manufacturers, cities) or advisory board members (public authorities including cities, healthcare actors, technology & service providers) to contribute to the European Commission’s initiative on the safe and secure integration of drones in European airspace, managed by SESAR 3 Joint Undertaking.

The event showcased the various medical use cases including the transport of human tissue, biological lab samples and medicine, automated external defibrillator and patients with the use of UAVs, as well as the supporting technologies developed and evaluated during the de-risking exercises in Droneport, preparing further improvements for the upcoming demonstrations in Antwerp and the MAHHL Region. The conference was structured in three sessions: Impact of U-space on cities, Technologies developed in SAFIR-Med and Introduction of the use cases.

The event attendees had the opportunity to find out about what is going on in the sector within the EU, from authorities, leading aviation and medical actors, as well as to network with the partners and learn more about their work at their respective booths. The highlights on the drone manufacturers side were the presentation of the brand new UAV from HyFly having long range and parachute recovery systems, and of course the passenger drone from Ehang. The advisory board members among other stakeholders were there to provide their valuable input and feedback.

The conference presentations are public on the new SAFIR-Med YouTube channel.

Over the following months updates on the two more announced events, project news, publications and outputs will be available on the official project webpage at www.safir-med.eu