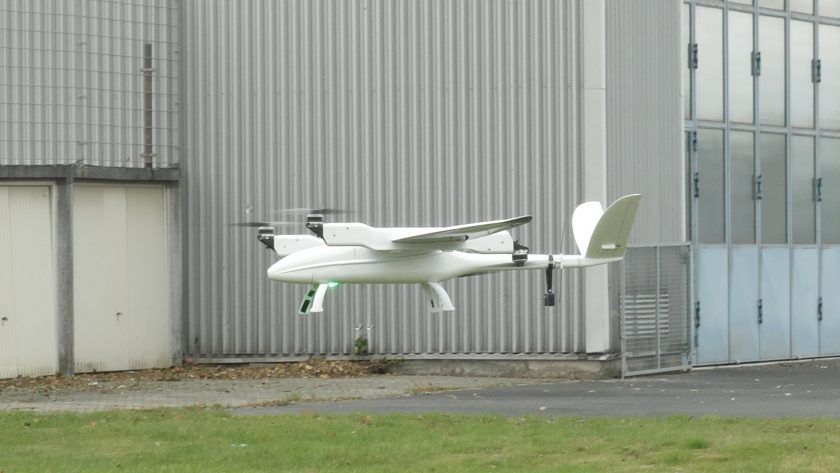 As part of the SkyCab II research project, Droniq GmbH and DFS Aviation Services (DAS), together with SkyCab partner Mönchengladbach Airport (MGL) and Germandrones, have now developed a procedure for integration of air taxis into current airspace architecture.

“The aim of the procedure is to create the basis for simultaneous flight operations of manned and unmanned air traffic at an airport with a control zone controlled by DAS.  The success of test flight was made possible thanks to the close working relationship between the two subsidiarises of the German air navigation service provider DFS, Droniq and DAS, as well as the engagement of the project partners, Mönchengladbach Airport and Germandrones GmbH. The latter company operates the drone as part of the SkyCab project.”

“With this project, we are laying the first foundations for the integration of air taxis efficiently and, above all safely, into air traffic,” explained Droniq CEO Jan-Eric Putze. “We are taking another important step towards advancing Germany as a lead market for unmanned air traffic,” added Putze.

Droniq secured the permission from the competent German aeronautical authority to operate test flights with drones in controlled airspace beyond the visual range of the drone pilot (BVLOS), said the press release. “An essential building block was the formulation of an operational concept and a risk assessment. The basis for this was the traffic management system for drones, termed UTM, developed by DFS and marketed by Droniq. The UTM makes the (manned and unmanned) air traffic at and around Mönchengladbach Airport visible to the drone pilot.  This add-on to the drone pilots working position means drone pilots can comply with the visual flight rules that apply in controlled airspace, such as right-of-way rules. They can also safely comply with air traffic control instructions.”

The objective of the two DFS subsidiaries is to standardise procedures for the operation of unmanned aircraft systems (drones) by conducting further test flights, thus enabling their use in control zones under the responsibility of DAS.

Philip Ammermann, DAS Tower Manager, said: “Thanks to the close cooperation with the SkyCab partners, Mönchengladbach Airport and Germandrones, and their technical systems, it was possible to integrate these test flights quickly and safely into normal operations.”

The aim of the research project funded by the German Federal Ministry of Transport and Digital Infrastructure (BMVI) and led by Aachen University of Applied Sciences is to develop a system for air taxis with an associated mobility concept for a model region bordered by the Meuse, Rhine and Ruhr rivers. At Mönchengladbach Airport (MGL), research is being conducted specifically on the integration of the new flying objects into active airspace. The project successfully completed its practical test here on Monday.

(Image: A Songbird drone from Germandrones takes off as a small-scale SkyCab for a sightseeing flight around Mönchengladbach.)