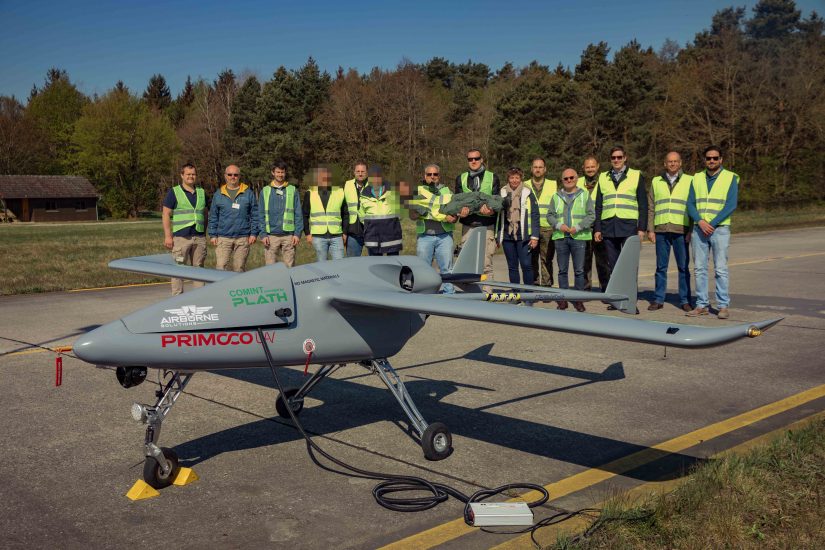 Germany-based PLATH and Czech Republic-based company Primoco UAV have demonstrated a successful Unmanned Aerial Vehicle (UAV) beyond visual line of sight (BVLOS) flight at Ingolstadt-Manching airport at the same time as regular air traffic in a military airspace of the Bundeswehr in Manching.  The flight was made possible with a LIGHT UAS OPERATOR CERTIFICATE (LUC) from Ingolstadt-Manching airport where the Bundeswehr unit WTD 61, GF 470 is located. It was the Primoco One 150’s maiden flight with a LUC in in German airspace. Equipped with a LUC, there was no further need to obtain an approval from the national civil aviation authority of Germany – Luftfahrt Bundesamt (LBA). The frequencies for this flight were allotted by the federal network agency – Bundesnetzagentur (BNA).

The WTD 61 Geschäftsfeld 470 in Manching was given a mandate from BAAINBw L 5.2 to conduct flight demonstrations to assess the capabilities of the Primoco One 150.

Three flights were successfully performed at the end of April. After ensuring seamless communication and procedures through a test flight in Visual Line of Sight (VLOS), the air space was opened for all other aircraft. During the following BVLOS flights several missions were conducted with focus on flight parameters, navigational accuracy, and other aspects.

The fixed-wing Primoco One 150 UAV has a take-off weight of 150 kg and a payload of 30 kg allowing an operation time of more than 15 hours non-stop in the air. PLATH´s onboard multi-sensor technologies and airborne radio and transponder allowed safe air traffic management (ATM) and collected all necessary data for the successful mission.

The PLATH system consisting of onboard multi-sensor technologies and multi-platform connectivity helped the system pass all operational tests by the Bundeswehr. The UAV is additionally equipped with an airborne radio and transponder which made air traffic management (ATM) easy and safe and provided all necessary data for the future-oriented flight mission.

For safety reasons the plane carried a ballistic recovery parachute allowing to minimise the landing impact in case of an emergency. The Primoco flight crew is a holder of both, civil and military drone pilot licenses. The cooperation demonstrated integration of the team´s UAV into the modern army structure and safe and effective compliance with latest aviation standards.