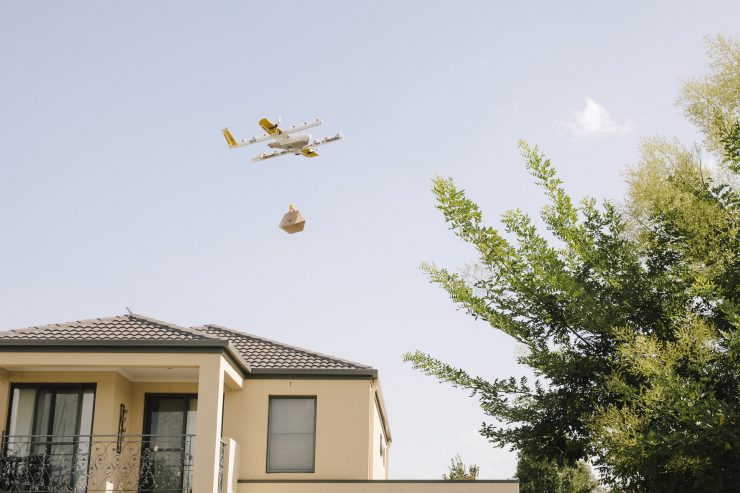 Australians spend around AUD2.6 billion (UKP1.4 billion) each year on delivered meals and place 68 million online food orders. The ordering process takes minutes but delivery is slow and costly. For 100 homes in the Australian capital, Canberra, that is about to change as drones take the place of motorbikes and delivery times shrink to not much more than the time it takes to boil a jug.

The CASA approval follows a five year testing process by Wing in Australia, including trials for the last 18 months involving more than 3,000 deliveries. While the primary focus of CASA is safety, it also has an obligation to take account of the impact aircraft use and operation will have on the environment.

CASA spokesperson, Peter Gibson, says that although aviation safety is their first consideration, factors such as noise, the environment and privacy are considered when a licence is granted.

“It certainly goes into our consideration that the operator is aware of potential negative impacts and prepared to do something about them, as Wing have done on the noise issue,” he says. “However these factors are not the central part of our approval process, which is the safety of people on the ground and in the air”

The process began when Wing approached CASA to do limited, line-of-sight trials in rural areas on the outskirts of Canberra. After six months the process moved to a more developed location and finally on to a suburban area for the 18 months of live home deliveries.

“All the way through Wing were keeping us fully informed of what was happening and so when they wanted to move into suburban Canberra we had all the data of what they had been doing,” Gibson said. “It’s been progressive from a sparsely populated area, to a semi-rural area and now to a full suburban area.”

“All this has been done very carefully and cautiously using the Joint Authorities for Rulemaking on Unmanned Systems (JARUS) set of standards for making safety judgements on what they were doing.”

“This is no longer a trial as we have approved it as a home delivery operation in North Canberra, probably the first one in the world,” Gibson said. “They have the certificate and there is no reason for CASA to intervene unless they want to change it or move to another city.”

As the service moves toward its operational launch, Wing has established a distribution hub in Canberra where product suppliers will be located, orders processed and drones despatched to surrounding suburbs.

Wing’s Head of Australian Operations, Terrance Bouldin-Johnson said that initially the service will be limited to 100 homes in four Canberra suburbs in what they call their Early Flyer program.

“Wing Early Flyers will gain exclusive access to our drone delivery service and get access to special invite-only events and experiences, including a personal onboarding to the service from a member of the Wing team,” he said.

“Our service allows customers to order a range of items such as fresh food, hot coffee or over-the-counter chemist items on our mobile app and have them delivered directly to their homes by drone in minutes. We expect to gradually expand to more customers and suburbs in the coming weeks and months.”

The drones, which can fly up to 130 kilometres per hour with a range around 20 kilometres, are designed by Wing, have a wingspan of one metre and carry a payload of 1.5 kilogram, or a combo of burritos and sides in consumer metrics.

For navigation they utilise a cloud-based Unmanned Traffic Management (UTM) system via on-board Wi-Fi and LTE to the drone and there are cameras built-in for additional navigation aids.

Wing say that “pilots currently monitor the delivery drones and can take control of their movements at any moment, although the long-term approach towards automated flight is to build a safe, effective, and scalable delivery system that won’t require individual pilot control.”

When the drone reaches the agreed delivery point, it hovers around seven metres off the ground, lowers the package and then the package disconnects from the line, which is retracted and the drone returns to Wing’s base.

The local traders association has been a vocal campaigner for the service and Wing is encouraging more businesses in the area to join the launch partners. “We’re excited to connect with more local businesses about how we can help them reach more customers faster, safer and more sustainably,” Bouldin-Johnson added.

Not all Canberra residents are thrilled about the drone deliveries and when community groups voiced their concerns the matter was raised in the Australian Capital Territory Legislative Assembly, with a parliamentary inquiry announced in November 2018. One hundred and fifty one submissions to the enquiry were received and three days of public hearings were held in in March.

Submissions came from representatives of Wing, CASA, Airservices Australia, community groups, government departments and trial participants. While the committee is not due to report until November, transcripts show that apart from the clear role of CASA for safety, confusion exists on who has direct regulatory authority in areas of noise levels, environmental issues and privacy.

Those opposed to the drones cite noise and disturbance to pets and animals as their main objection and Wing have shown their willingness to listen and act by changing drone designs to reduce noise and altering flightpaths to alleviate environmental concerns.

Wing CEO, James Ryan, travelled to Australia for the hearing and said that the project was world-leading and at the edge of technology but without community support it would not be a success.

“These trials have been the most advanced drone delivery operations in the world,” he said. “But ultimately we want to just admit that we will not be successful if we cannot create a technology and a service that is acceptable to the greater community.”

While this is the first drone delivery service in Australia, CASA has already issued some 1,600 Remote Piloted Aircraft Operator Certificates to approved commercial drone operators for aerial photography, agriculture, construction, emergency services and other applications.

Mr Gibson said that the door is now open to any potential drone delivery operator to approach CASA with their plans and each application will be treated on its merits. Looking ahead he sees the time coming where integrating drones into the current airspace architecture will become the next big challenge for regulators.

“At the moment we keep them all nicely separated from each other but you can see the day is going to come where you say here is the drone airspace and here is the manned airspace  but now they have to integrate,” he said. “How will you design this airspace to work safely for everybody and will everything need some form of transponder to communicate with each other?”

“The technology is changing all the time and getting better and better which drives what people want to do with the drones,” he said. “That drives what we have to do from a regulatory sense as well.”

April was a good month for Wing  as it also became the first drone delivery company to receive Air Charter Certification from the US Federal Aviation Administration. This will allow Wing to begin a commercial service delivering goods from local businesses to homes in the United States, where many of the learnings from Canberra will no doubt be put to good use.