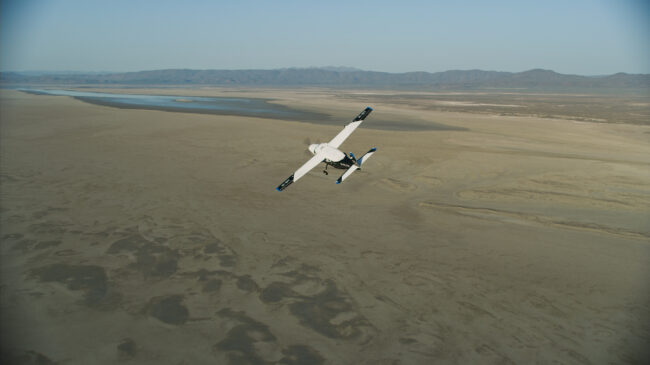 Data collected by Xwing from the trials will be used to analyse:

Further details from the press release:

As wildfires continue to plague the Western regions of the United States, with over 5,000 occurring annually in California alone, it is essential that US agencies determine how to leverage new technologies and services to best address and manage natural disasters. Current methods involve dynamic flight operations that primarily require manual coordination among helicopters, small drones, large drones, and manned aircraft to safely and simultaneously drop water/fire suppression in a small area. Recognizing these gaps, NASA is collaborating with disaster response agencies and the FAA to integrate UAS and UTM-based information services to improve disaster response efficiency.

As part of the collaborative effort, the FAA and its partners at Xwing and the Alaska Center for UAS Integration are evaluating information-centric approaches to improve management of traffic in the vicinity of FTAs, including general aviation and commercial UAS operations.

“This project will provide us with a more holistic view on how to best integrate large UAS in the existing National Airspace System” said CEO of Xwing, Marc Piette. “Leveraging UAS, we have the potential to make everything from wildfire fighting to oceanic operations more efficient and safe. We believe the data that we collect from these operations will be essential to helping the FAA and NASA bring unmanned flights to more types of operations in the aviation industry.”

The flight operations for this project will take place in Northern California, with the project currently underway and running through April 2023. These operations will leverage Xwing’s operational autonomous flight technology, deployed on our Cessna Caravan aircraft, with a safety pilot onboard for the missions. Missions will center on integrating large UAS into flight environments that include interactions between general aviation, commercial UAS, and disaster response air operations such as wildfire events. The goal of this project is to evaluate how the aircraft and remote operators interoperate with other aircraft, air traffic control in very active and dynamic environments. Additionally, partners like AirSpace Integration and ATA LLC will support in the management of flight data, integrations with other FAA systems, and supporting the operational flight trails.