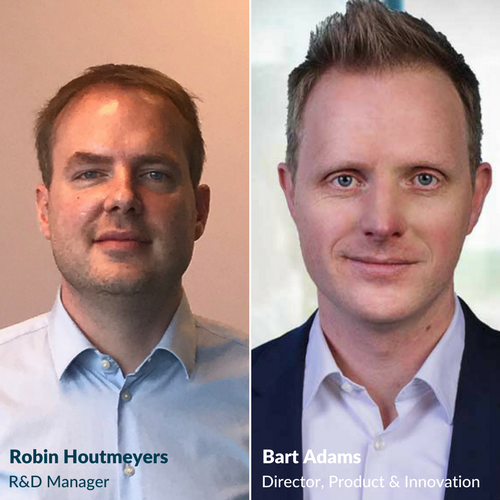 Could you please provide some statistics about the increase in data caused by the growth in number of drones?

Bart Adams: Aerial mapping: now one can acquire imagery and video from sites and cities on a daily basis as opposed to years – that’s two orders of magnitude more data to deal with. Photogrammetry technology has also advanced so that detailed 3D models can now be more easily extracted. Add to that laser scanners that are now mounted on drones and unmanned platforms; these easily generate millions of points per second.

How can organisations manage this explosion of data and “solve” the drone problem?

Bart Adams: One needs to shorten the time between acquisition and exploitation of the data. This means that pre-processing should be avoided as much as possible. If pre-processing takes longer than the useful lifetime of the data, the result is worthless

Robin Houtmeyers: Additionally, machine learning techniques can help the exploitation the large volume of data generated by drones – one example is the use of convolutional neural networks, a deep learning technique to analyse visual imagery – for instance, to detect patterns or abnormalities.

Could you provide specific information about changing data standards and data streams in the unmanned domain?

Robin Houtmeyers: To manage drone traffic in ground systems, we see the use of existing system wide information management (SWIM)-adopted standards such as the Aeronautical Information Exchange Model (AIXM) for aeronautical data exchange (e.g. to represent the zone in which a drone will fly and to have access to airspace data), Flight Information Exchange Model (FIXM) for flight data exchange (e.g. to represent a drone flight trajectory and to have access to flight traffic data) and All-purpose Structured Eurocontrol Surveillance Information eXchange (ASTERIX) for surveillance data. This makes it easy to connect drone-specific systems with regular / existing ATM systems that already make use of these standards.

How are regulators and technology developers going to show that the UTM world can be safe?

Robin Houtmeyers: Continuous collaboration between regulators and technology developers is /will be key to enabling a safe integration of drones into our airspace. In Europe, for instance, several initiatives are being organized by Eurocontrol, the European Aviation Safety Agency (EASA) and SESAR JU in cooperation with stakeholders such as air navigation service providers (ANSPs), UAS traffic management (UTM) providers, drone manufacturers, drone pilots. One example is CORUS or Concept of Operation for EuRopean UTM Systems, a SESAR Exploratory Research project to define a harmonised approach for integrating drones in to Very Low Level (VLL) airspace (up to 500ft/150 meters). Another, more general example is the U-space blueprint, a vision of future drone integration into ATC/ATM made by SESAR JU. U-space refers to a set of services and procedures designed to support safe, efficient and secure access to airspace for large numbers of drones – in all operating environments and in all types of airspace (not limited to VLL airspace). Outside Europe, collaboration is happening with ICAO and organizations like FAA and NASA.

Bart Adams: UTM systems need to leverage the industry proven technologies that are now used in the ATM domain. They should not make the mistake and try to build safe solutions on classical GIS mapping solutions, where inaccurate map projections and data transformations are common place. Instead, the same technologies as for ATM should be used for UTM. This will also enable integration and interoperability between the manned and the unmanned world.

Could you provide specific information about how Luciad’s tech works in the Unifly use case?

Bart Adams: Luciad is used both for cloud and edge in the Unifly use case. On desktop and mobile devices, one can prepare for flights, seek approval, and monitor the approved volume of operation. Data is served between edge and cloud over industry proven standards for aeronautical data exchange, including AIXM5.

Please provide information about if and how data can be transferred between UTM and ATM.

Bart Adams: This ties in to the previous answer: by using formats, standards, and protocols that are commonly used in ATM, also in UTM, data exchange becomes easy and integration of the two worlds straight forward.

Please provide specific differences between how UTM and ATM work – such as what data they will use.

Bart Adams: As flights in the UTM domain often operate at low-level altitude, obstacle avoidance is extremely important. This means that more accurate data sources are needed, including detailed description of obstacles such as power-lines and windmills, but also 3D models of cities and urban areas.

Robin Houtmeyers: For UTM, existing aeronautical services and infrastructure (such as global navigation satellite systems as well as those from other sections (e.g. mobile communication services) are leveraged – also to minimize deployment and operating costs.

Please provide specific information about the challenges that will be faced in the next five years.

Bart Adams: Regulation and accurate and up-to-date 3D data availability. Can you trust the data? Do you allow a drone to operate based on the data?

What new technology will be needed to face the growth of drones?

Bart Adams: Drones need to be able to operate autonomously. They need to be able to operate also when connection with the operator or base station is lost. This means on-board routing/obstacle avoidance/data analytics are needed. Accurate data capture, representation, compression, including point clouds and 3D meshes for obstacle avoidance. Reliable telecommunication technologies are needed that allow drone-to-drone and drone-to-ground communication avoiding interference and allowing for safe and efficient operations. Also for data exchange, including video, imagery, sensor data, 3D data…

Robin Houtmeyers: One example is the introduction of low-power, miniaturized Automatic Dependent Surveillance – Broadcast (ADS-B) sensors for use on drones. ADS-B technology is installed in aircraft worldwide to announce identification, position, altitude and direction; it would allow ATC to detect drone traffic. For data communication, we’ll see use of advanced hi-speed wireless systems such as LTE/5G in the future.

What is Luciad doing that is new to solve this problem?

Bart Adams: Luciad is working on technologies that allow to deal with all the data sources important for the UTM domain. These include standardization of exchange formats and protocols; efficient representation and compression of the complex 3D world (reality meshes, point clouds); streaming protocols to make said data available to unmanned vehicles and to allow unmanned vehicles to stream data back to ground or to other drones; focus on edge computing to avoid having to stream data off the drone that will not be used; and algorithms and technologies that avoid having to pre-process all data before making it available.

Bart Adams is the Director, Products & Innovation and Robin Houtmeyers the R&D Manager at mission critical software developers Luciad, which is now part of Hexagon.